Friends, we here at PCU have been neglectful, and we’re very sorry. Usually, we cover the best in geek television, from broadcast to Netflix.

Now, we admit we can’t keep a regular tab on everything. There’s far too much out there, not to mention shows that are just plain horrible or locked behind paywalls.

Still, there is no excuse for not covering shows that are fantastic and fun. Sadly, we did precisely that when we did when we didn’t include SyFy’s The Magicians.

Well, there’s no good excuse, but there are reasons you may not have seen the show.

I love The Magicians, but I didn’t watch until SyFy offered all of Season 1 online. I’d heard about the series, based on the novels by Lev Grossman, but I wasn’t sure if it would be my cup of tea.

I can tell you now, I binge-watched Season 1 like it was The Punisher.

For those that don’t know, The Magicians is like Harry Potter meets Buffy and Lost Girl. The show combines fantasy, horror, comedy, and drama with some severe drinking, drugs, and sex.

Like Rowling’s setting, SyFy’s series is initially set in a real world ignorant to the presence of Magicians. Many of them are trained at Brakebills, a secret college hidden in New York state; others, however, self-teach or trade spells on the streets as Hedge Magicians.

Unlike Harry Potter, The Magicians is far darker and more adult; there is no childlike wonder or allegory for adolescence in this series. Instead, these characters are grown-ups in the real world entering a society that is mystical but extremely dangerous.

Spells and innate abilities send students into awkward or hazardous situations. College life is not only complicated by magic, but also by dark forces from other realms.

Hedges treat magic like a drug and fall to new lows for just one more taste. Mystical creatures and gods are so debauched they make Rowling’s villains look like a Disney show.

Before you think The Magicians is all gloom, the humor in this show is on par with Buffy writers while pushing the envelope to American Pie levels. Sexuality, bathroom humor, witty insults, and pop culture references abound.

A psychic suddenly snaps at his roommate because the other guy keeps thinking about Taylor Swift songs. Two magicians under surveillance use Battlestar Galactica, Game of Thrones, and Gossip Girl references as a code.

Sex jokes abound, and one god provides his “essence” to drink through… well, you’ll just have to watch that episode. The juvenile humor is amusing and yet somehow maintains that balance between high and low brow.

Now, despite this praise, The Magicians also has some critical points for potential viewers.

On top of drugs, sex, etc., there are many “trigger” topics, from rape to abortion to suicide. Syfy’s series is not for the faint of heart, but they appear to cover these issues with respect and gravity.

Although the characters are more diverse than Whedon’s shows and tend to avoid too many stereotypes, they’re still primarily Caucasian. Of the main characters, only two are PoC, although another role is LGBT.

Still, the characters are really what makes this show so good. You will learn to love them, hate them, and love them again, and each season your preferences may change. 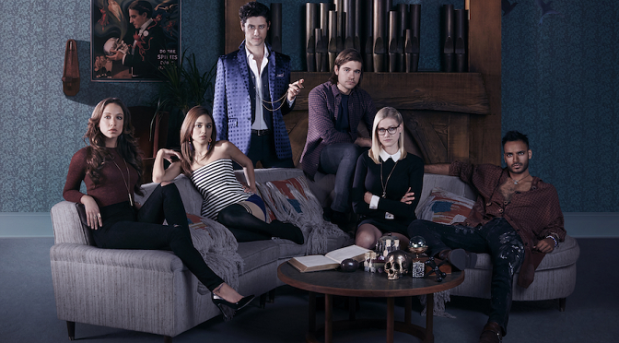 Quentin and Alice are your Ron and Hermione, bumbling and brilliant (respectively) and with more complications than a Shakespearean couple. Penny has the innate talent, but all the worst luck; his never-ending frustrations are all too relatable.

Julia is the friend who ends up stuck among the Hedges, while Kady is the one from the streets who gets into Brakebills. Both end up dragging their problems into everyone else’s, leading to endless complications.

My personal favorites, however, are Eliot and Margo, the senior students and defacto “leaders.” They’re the best (and worst) of Karen & Jack, Pam & Eric, or Patsy & Edina, but with far more depth, so you cheer for them even when they’re absolute jerks.

Now, I’m not going to spoil much as I think you should watch the show yourself. Let’s be clear, however, that we’re Season 3 has already started, so you need some catching up.

Season 1 was your dark reflection of Harry Potter, where the characters train their powers and become embroiled in a mysterious villain’s plans. You’re also introduced to the mystical realm of Fillory, another world from whence all magic flows.

Season 2 is a twisted version of The Chronicles of Narnia, with the characters involved in the politics and mythology of another world. This season takes the show to a whole new level with dark gods, mythological creatures, and magical contracts.

Both seasons are available on Netflix, so I suggest you sit down and binge, then find the most recent episodes through SyFy. This show only gets better each time I watch it, and every time I think there isn’t something new or a line they won’t cross, I’m pleasantly surprised.

We’ll be back with more coverage once Season 3 ends, but until then, keep practicing your craft, be careful what gods you call on, and don’t ever renege on a deal… especially in Fillory.

The Magicians currently airs on SyFy channel, Wednesdays at 9/8c.

3 Comments on Why You Should Be Watching ‘The Magicians’