Legendary Hellboy creator Mike Mignola, bestselling iZOMBIE co-creator Chris Roberson, acclaimed artist Christopher Mitten and award-winning colorist Dave Stewart are pulling back the curtain on the past of the mad and mysterious Russian sorcerer Rasputin in Rasputin: The Voice of the Dragon, a new five issue mini-series from Dark Horse Comics.

“When Hellboy first arrived on Earth it was in the waning days of WWII, as a group of Nazi occultists lead by the Russian mystic Rasputin sought to summon a demon from hell to help them defeat the Allies,” said Chris Roberson. “The demon child didn’t appear where expected, though, and was instead adopted by Professor Trevor Bruttenholm, an English occult investigator who was on hand with American troops. But while that struggle between Allied forces and Nazi occultists has always loomed large in Hellboy’s backstory, we haven’t before fully explored just what characters like Rasputin and Bruttenholm were up to in the war years. In the pages of Rasputin: The Voice of the Dragon we begin to dig deeper into that conflict, and explore both Rasputin’s rise to prominence and young Bruttenholm’s gradual realization that there were more dangers lurking in the shadows of wartime Europe than the Allies had ever suspected.”

In the series, a conspiracy involving the Third Reich and a dead member of a sinister secret society sets Professor Bruttenholm on his first mission—to find the man who’d soon bring Hellboy to earth. The mad Russian sorcerer Rasputin had been thought dead since 1916, when a group of noblemen sought to end his influence over the tsar. Now Rasputin works with the most twisted members of Hitler’s inner circle, and he’s about to cross paths with the man who’ll go on to found the Bureau for Paranormal Research and Defense.

Issue 1 of Rasputin: The Voice of the Dragon goes on sale on Wednesday, November 15 with a cover by Mike Huddleston (The Strain) and a variant cover by Mignola.

“Rasputin: The Voice of the Dragon” #1 Preview Pages 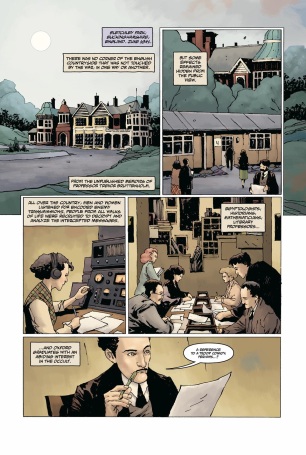