Speechless is back for its second season, and this one is off to a great start! The DiMeo family is still in top form, bringing the sass, the laughs, and the sarcastically heartwarming moments, just as they did in the first season. I’m so glad to see that this charming, poignant, and hilarious series was renewed for a second season, especially after leaving off on such a high note in season 1; with Maya learning that JJ is growing up and needs his independence, Kenneth being accepted as part of the DiMeo family, and Ray getting a girlfriend (after being humiliated by his crush early in the season). Season 1 saw the series garner an average of 5.38 million viewers per episode, so it will be interesting to see if that momentum can be captured again for season 2.

The premiere episode of season two had mom Maya finding a love note in JJ’s luggage from camp (because we all know that JJ is charming and the ladies love him), and set out to discover who sent it, again without truly thinking of what consequences her mission could have; as she is wont to do. The shenanigans that this series has built itself around are back in full effect, and the comedy is still on point – while still retaining the profound and important messages on which the show has built its foundation.

Director Christine Gernon and writer/executive producer/creator Scott Silveri return to this episode with their respective distinct styles, and the two blend perfectly. Gernon’s direction of the cast really takes the subtlety of Silveri’s writing into account, and the two create a hilariously well-done harmony. This creative duo really knows how to play off of one another’s strengths, and it’s great to see the two back and shining in their respective roles.

One of the standout acting moments in last night’s episode was Mason Cook’s portrayal of young Ray DiMeo. Cook seems to have an innate ability to bring out Ray’s nerdiness, but still give the character a charm all his own. From the looks of things, it seems that we may see Ray do some serious growing this season, and it will be interesting to see how the character progresses with his newfound love life.

We should say so. 😊#Speechless pic.twitter.com/mO5f3Ay9e0

That’s not to downplay Kyla Kenedy’s hilarious snark as Dylan, as she unleashes her no-holds-barred quips on those around her, or John Ross Bowie’s subtle “straight man” comedy as dad Jimmy, who keeps it together while giving Ray a decidedly…unique pep talk. There’s just something about the parent-child dynamic with Bowie’s acting that makes it not only believable, but very relatable as well.

Now, I may be biased, but Micah Fowler’s work in last night’s episode was also stellar, and I am glad to see a focus being put on the character of JJ as a teen with teen issues. Fowler continues to impress with his ability to speak volumes without actually saying a word. I love the character of JJ, and the climax of the episode (if you saw it you know what I mean) was not only heartwarming, but actually made me cheer out loud for him. 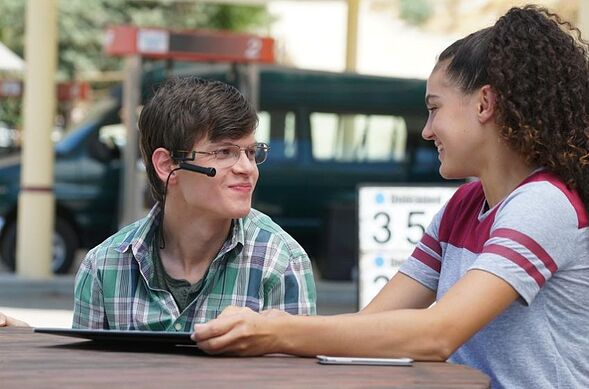 In its second season premiere, Speechless continues to focus on thematic elements like personal independence, coming of age, the family dynamic, and of course, the perception of disability in today’s society. The impeccable acting, directing, and writing work together to really deliver on these themes, and it’s done so in such a way that the messages are never too on the nose, too predictable, or too dry. As I’ve said so many times before: I love this show, and can’t wait to see what the future holds for its loveable cast of characters.

4 out of 5 cross-country drives