The best way to get out of a hole is to stop digging.

The sixteenth anniversary of 9/11 was two days ago. Comics writer Aubrey Sitterson, current writer of the G.I. Joe comic from IDW, decided to tweet out the following tweet.

Oof. It’s possible that he wasn’t being clear on what he meant, as he started getting a lot of negative replies from his readers, who were kind of offended that the writer of the fundamentally American G.I. Joe comic would say something like that on a national day of mourning. So after some understandable criticism, he followed up: 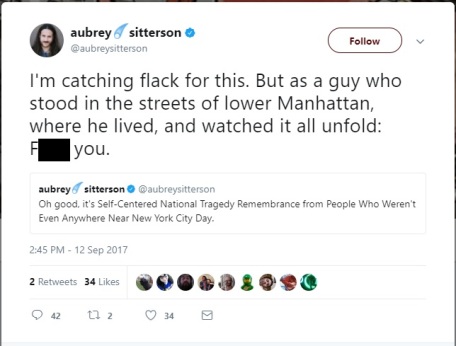 Well, OK then. Still, a lot of his Twitter replies were predictably upset with him. Some noted that his comment came off as very exclusionary, suggesting that only New Yorkers have a right to be upset about 9/11. Some wondered what it was worth that they weren’t in New York, but did have friends and relatives who were. Others pointed out that there were tragedies in Pennsylvania and Washington D.C. as well. Still, others pointed out that 9/11 was a distinctly American tragedy regardless of the locality of the terror attacks, and that it’s disturbingly insensitive of the writer of G.I.-freaking-Joe to be posting something so self-righteously tone deaf.

It would be remarkably easy of me, or any other writer, or anyone with Twitter access, to go off on Mr. Sitterson about how awful these tweets were. I mean, 9/11 affected everyone in America that day. It affected people in New York and Washington D.C. more, no doubt, but Americans across the rest of the country suffered their own degrees of confusion and fear as well. Anyone on any other airplane wondered if they were also going to be hijacked or shot out of the sky. People working in any other high-rise or government building wondered if they were going to be targeted next. People in the military wondered if they were about to go to war. Oh, and then there’s people who weren’t in New York or DC, but nonetheless had friends or family who were.

And those of us on the ground who had no connection to the events at all were, nonetheless, glued to televisions and watched several thousands of people die on live national television. 9/11 happened at a time where the accessibility of cable news and the internet peaked in such a way that virtually everyone, everywhere had instant access to what happened. In a sense, we were a horribly, nationally unified people for one day.

Now, I am going to be charitable here and say that Mr. Sitterson probably has a point that 9/11 is, to some degree, commercially and socially co-opted by people who had no direct connection to the events. If you were on the ground in New York or Washington, or if you had a loved one who was killed or caught up in those events, then yeah, you’ve got a greater stake in the meaning of the day. You probably take it a little personally when someone claims to be just as upset as you and is maybe exploiting the spirit of the day for something that’s still haunting you. Got it. You’re probably not wrong there, Mr. Sitterson.

Rather than play a game of “oppression olympics” with Mr. Sitterson, I’m going to point out that his larger point is being lost, badly, in the means he’s using to convey this issue. The intent is to persuade people that 9/11 was a major tragedy for the city of New York (which it was) and that some vaguely unspecified group of people have, pardon the term, hijacked that event to show that they’ve suffered just as much (which is probably also true, but it’s hard to confirm beyond the feeling that this is one of those “everyone knows that” arguments).

Instead of launching a serious discussion of what it means to mourn 9/11, Mr. Sitterson has pissed off the following people:

Mr. Sitterson has repeatedly replied on Twitter that this wasn’t his intention, mostly through the standard “go back and read my post” snark.

My number one rule as a writer is that the burden of persuasion and clarity lies on the person communicating, not the audience. I believe the audience has a duty of charity and has to be careful not to project their own perspectives onto someone else’s words, of course. Nonetheless, when you get repeated accusations that your words are tone-deaf and insensitive, it’s time to take a step back and ask whether the original point was clearly made, or even correct. Pointing fingers at your audience and accusing them of not understanding you is the wrong way to go about this.

There’s two lessons to be drawn here. One, Twitter is a lousy medium for making a substantial and controversial point. You have 140 characters, maybe less, to convey your message. It might be a lot more productive to write a longer article that spells out your thesis and link to it in the Twitter. You might say “Quit hijacking 9/11” and then hyperlink to your article which explains the tragedy from your perspective and explain why people don’t understand what you do.

Second, we live in a very outrage-oriented culture these days. If you haven’t noticed, everyone is just a little on edge lately and has been for awhile now. Twitter is a cesspool of discussion. So are most comment sections of any website, even though they have much more room to make a point than 140 characters. Of late, anytime anyone makes any point, there’s a frequent response of “So what about this…?” or “You talk about this, but not about that.” The internet is, frankly, a political and social powderkeg lately, and communicators need to be fully aware of the possibility that they’re going to set off a metaphorical explosive.

I am going to be blunt here: I had no idea who Aubrey Sitterson was before today. I read plenty of comics, but not G.I. Joe. But now I’m going to remember him as the guy who set off a crazy 9/11 argument that educated few and changed even fewer minds. He’s probably putting his position at IDW at risk. He’s probably not bringing any new readers onto the book by doing this. He’s probably not opening a lot of doors for himself here.

I’ve been given advice in my job about sending angry e-mails. It’s this: when you’re driven by passion to write something, then write it…but don’t hit “send.” Give it 24 hours, and then see if you still want to write it. If you mull it over in your head and realize that you shouldn’t send it, then the reasons for doing so will become clear. Believe me, this is really good advice, because it’s kept me from sending very, very stupid things which could have impacted my career.

Mr. Sitterson has made his rant about 9/11, and now he’s doubled down on it. He’s going to have to live with the consequences of that, to include how his readership sees him and how his employers value him. But before tweeting, he really should have considered whether his message was both valuable and clear.

In retrospect, it seems like it wasn’t, because I’m seeing little agreement with his point and a lot more anger and hand-wringing over someone co-opting a national tragedy. Ironically, the co-opting seems to have, inadvertenty, been done by Mr. Sitterson himself.