That is, until now.

In a recent interview with GameInformer, Assassins Creed Origins director Ashraf Ismail revealed that, not only are there “many” playable characters in the newest chapter to the franchise, but that Bayek’s wife Aya will be one of them. In explaining this addition to the story, Ismail stated, “It is primarily Bayek’s story and journey, and this is the decision we had made because it was what we came to in terms of when we were building this experience, the narrative, the gameplay, this is the experience we wanted to create. So, it was a choice that we made [not to split the campaign].” 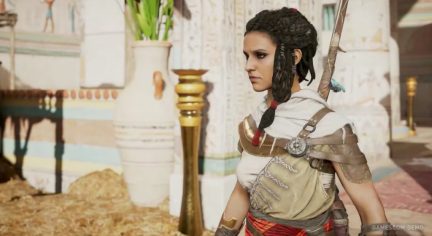 As it stands, only a few things about Aya’s part in the story have been revealed so far. We know that she is a native of Alexandria, and that she moved to the village of Siwa when she was young. Presumably, this is where she met Bayek, as the story states that the two grew up together. We also know that Aya and Bayek trained together as they were growing up, but that she is not a Medjay (we talked about Bayek being a Medjay in an earlier article). It has also been revealed that Aya believes very strongly in Cleopatra as a leader, and that Aya will play a heavy part in introducing Bayek to Cleopatra. While Bayek does believe in the future queen, there will be some disagreements between him, Aya, and Cleopatra throughout the story.  Finally, we know that Bayek and Aya’s union is what will ultimately give life to the Assassin Order. 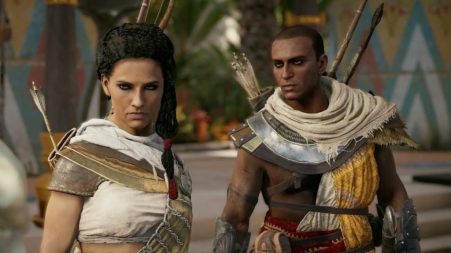 As we said earlier, Aya is not the only other playable character in Assassins Creed Origins. While game director Ashraf Ismail has said that the team is not yet revealing the identities of the other playable characters (or how they will play), we do know that they will only be playable in certain missions. It’s also a good bet that they will not be as skilled as Bayek, so as to not lessen his appeal or importance to the story. He IS the progenitor of the Assassin Order, after all.

Assassins Creed Origins will be available on October 27, 2017 for PS4, PC, and Xbox One.

What do you hope to see from more playable characters in Assassins Creed Origins, dear readers? How do you think Aya will factor in to the story? Let us know your thoughts in the comments below!