The Glass Castle is built on a strong foundation of struggle.

Not every person on this planet comes from what is considered a “normal” family. “Normal” is a very fluid concept depending on the person you ask. The levels and expressions of love between each member of a familial unit towards one another can vary like the personalities of the family members themselves. The Glass Castle is evidence of such theories.
Based upon the true story written in a memoir by Jeanette Walls (Brie Lawson), a reputable journalist that made her rise in the late 80s-early 90s and her effort to balance her successful career and her childhood past of being raised by her vagrant/homeless parents. The flashbacks center around her visionary father Rex Walls (Woody Harrelson) a brilliant engineer with great promise, but very little follow-thru, in manifesting his dreams into a stable concrete reality for his family due to his alcoholism and other personal demons from his past that he has yet to address. Jeannette’s mother, Rose Mary Walls (Naomi Watts) is an eccentric painter that supports the family’s nomadic lifestyle and is devoted to Rex and his ideals.  Throughout the film, you see the Walls children make the most of their parent’s dysfunction and carve out lives of normalcy as adults; Jeanette fighting the hardest to achieve a higher societal class while possessing between her siblings the closest bond to their father. 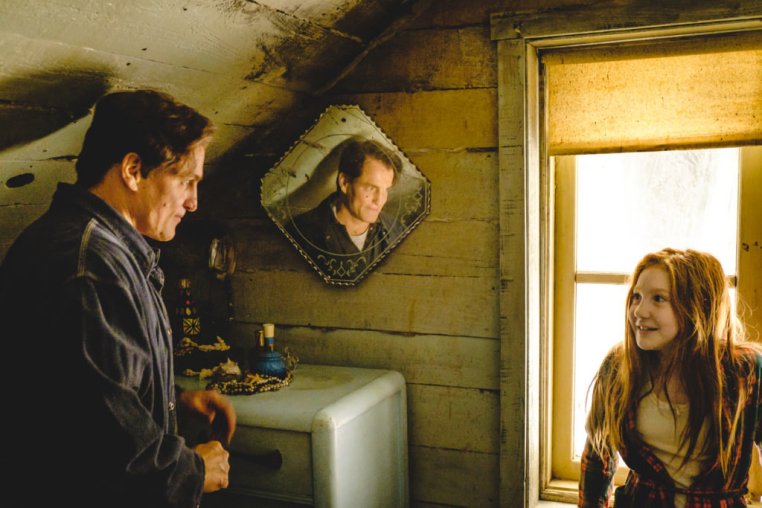 The film is a period piece of mid-to late 20th century and the accents and references to each time period is quite accurate; no easy feat for a costume designer that had to research what “poverty stricken” clothing looked like for children and adults in the 60s through the late 1980s. A good portion of the movie was filmed on location(deserts of the Southwest as well as Rex’s hometown of Welch, West Virginia) helped the story along in a strong and silent way.
As for the acting, the cast (including the children) vibrated accuracy. Woody Harrelson as Rex Walls took this role to heart and all other roles Harrelson has coveted on the silver screen were merely in preparation for this one. Some would disagree, until they viewed the original footage the real Jeanette Walls provided of her father recorded prior to his death. Naomi Watts has particular knack for playing the unconventional, yet helpless mother…that is, if you are into to seeing that level of redundancy in an actress. Brie Lawson handles the dichotomy of emotions well as Jeanette Walls. Lawson holds the reigns exhibiting Walls’ strength yet opens the door just a crack to let the vulnerability that Walls rarely had the chance to express-as a child or an adult-in.
This film, if critics are wise, has Oscar potential; especially for Harrelson. The general populous will find great intrigue and relatability to the dysfunction yet for others , this may be the first time that they experience the daily woes of modern day poverty firsthand.
I applaud Destin Daniel Cretton and  Andrew Lanham for adapting the screen play in the way that they did. It was an easy job for the editors and the rest of the cast and crew. watching the film you could tell that they wanted to characters to have viewers tap into the feeling of knowing what it is like to have your judgement, your sense of security undermined by your parents because they were either hiding a truth or denying it to themselves.
I give it a 5/5 strictly for the performances by Lawson and Harrelson.
This film is dedicated, “To all families who despite their scars, still find a way to love.”