It’s been almost one year since we got our first look at the upcoming game, Frostpunk by Polish developer 11 bit studios, who also created 2014’s award-winning This War of Mine. When that first trailer, dubbed “The Fall” was released, gamers got a peek at the dangers and trials they would face, then some gameplay details were released when developers showed it off at this year’s E3 conference.

Now, we’re getting another trailer for the upcoming title, as well as some more information about it. This title marks 11 bit studios’ return to the survival game genre, but with a twist. Where This War of Mine centered on a single individual and his story, Frostpunk will challenge players to help an entire society of civilians survive in a frozen wasteland, while asking gamers to consider some interesting questions about humanity: “What [is] society capable of when pushed to the limits? Are we able to survive? Who do we become in the process?”

Taking place in what is described as an alternate reality 19th century, civilization as we know it has been erased by what appears to be a second Ice Age, leaving only small bands of humanity as survivors. Players will take control of one of these groups of survivors, as they set out on an expedition to find a way to survive this harsh and unforgiving tundra. The first thing that players must accomplish, of course, is to locate and start a generator. While locating the generator isn’t terribly difficult for the group, this wouldn’t be a survival game without something going sideways. The expedition becomes trapped in a crater by a storm, and the generator seems to be frozen solid. Thus begins the quest for survival.

Frostpunk will start by challenging players to locate and collect resources so that they can construct their city. This introduces the element of city building, with heavy levels of resource management (complete with limitations, of course), as well as daily goals for survival – like food and warmth. Here’s where this title differs from other survival games, though: There’s an emotional and moral element to Frostpunk, which is not normally seen in these types of games. Each decision made in-game will not only hold consequences for the individuals, but for the burgeoning society as a whole. Players will have to carefully weigh their morals against the survival of the group, and may face some heartbreaking choices. 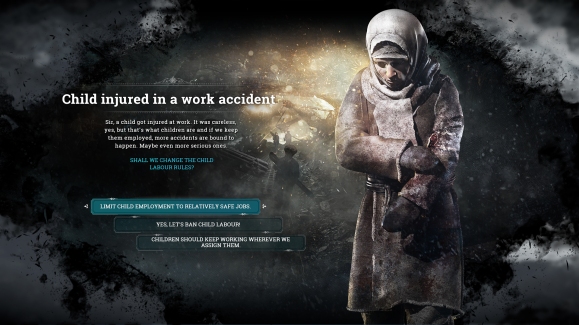 During the presentation at this year’s E3, 11 bit studios’ lead designer Jakub Stokalski reminded the audience, “The game is about survival, but it’s really about the survival of the society not any one particular individual.” With the societal leader mechanic taking center stage in this title, players will be forced to make decisions whose effects will ripple out far through the group, yet be rational strategies for survival. The design of the game, however, is said to give players a more personal connection to those characters affected, landing a bigger impact as a result of each decision made.

Mahmoud Abbas once said, “We cannot build foundations of a state without rule of law”, and Frostpunk is no different. Another core feature of the game will be the enacting of laws in order to create a functional society. Some of the choices in enacting laws in the frozen tundra however, come with a moral cost. Do you use child labor? How do you deal with the sick and injured who cannot be physically productive members of the group? Every one of these law-making decision will then cause the populace to gain or lose “discontentment” or “hope”, which will then further affect how your society operates, as each survivor will react to the leader’s decision(s), and form their own opinions based on those. So don’t expect every survivor to simply do what you tell them to do… Expect commentary and long-term consequences.

The size of the survivor group will not stay stagnant either, it seems. Gamers will begin the game with their initial group, but will have the ability to set up beacons to draw others to them. This will offer the challenge to players as to how to best utilize their workforce, who are key to building the most important resources – like shelters and medical posts. Push the workforce too hard in poor conditions, and you could have more sick and injured survivors on your hands, which of course will cause the rest of the society to have to pick up the slack, putting a strain on everything else in turn. More research will unlock new technologies, but will require more labor. Choose the amount of survivors you put toward things carefully, as you’ll need to keep them around in order to explore the area outside of the crater, too.

As with any city/world building game, your basic goal is to create a functional and impressive place for your society to exist. However, players will have to use forethought and planning skills to help their society survive. Stokalski gave players an idea of this when he said, “You are expected, as the leader of these people, to strategize into the future and not just react to problems as they come. Doing that will get you nowhere.” The game will apparently require players to think about where they want to take their settlements as their society progresses, even more than simply saying, ‘This is happening right now, so how do I address it?’

While Frostpunk will have a story mode that Stokalski estimates will take approximately 30-40 in-game days to complete, it will also have a sandbox mode for players to practice, explore, and complete randomized challenges.

Frostpunk is still in pre-alpha, and 11 bit studios are shooting for a completion time of the end of 2017. That being said, Stokowski mentioned that his team is focusing heavily on quality, and that the developer will take more time if the game’s needs require it.