Where are you from originally, or where do you currently reside? Boston.

How long have you been cosplaying? About 2-3 years? Wow, it feels longer than that.

Who or what inspired you to start cosplaying? I don’t think there was a specific “who”, but when I went to my first Anime Boston in 2015, I was just stunned by all of the amazing cosplayers who were walking around. It was pretty much at that con that I decided I wanted to be one, too.

What do you do when you’re not cosplaying? Currently, I’m an undergrad student studying International Relations down in DC. I also sketch in my spare time, ski, and play as a goalie in ice hockey. I’m also working at a law firm for the summer. 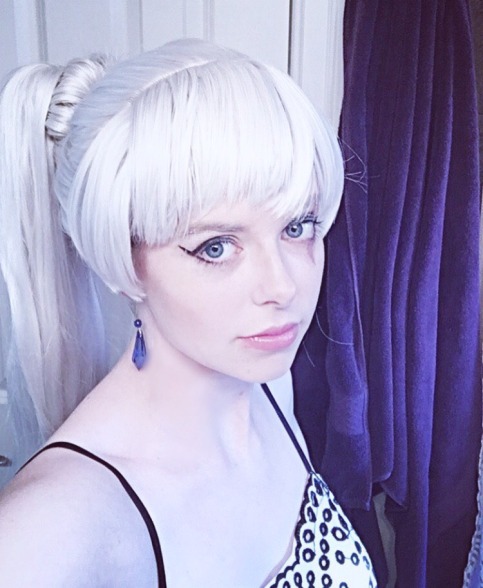 Which costumes have provided the biggest challenge and rewards so far, and why? Well, I haven’t made too many things personally (kinda hard to make costumes when you don’t have your own sewing machine), but I did have a commission that gave me some heart palpitations. I commissioned my Eeveelutions!Nico for Katsucon of 2017 around September of 2016. It was shipped from Brazil in December. It got stopped at the border and it took five weeks of calling and pestering border officials to get the commission out of limbo, so it arrived one week before the con. Needless to say, I was very close to crying tears of joy when I saw it came in. And, of course, the reward of running around my first Katsucon with a full Love Live group and getting gorgeous pictures of me in it was worth it.

What is the best advice you would give someone new to cosplaying? Don’t be afraid of store bought. I thought I would be severely judged for it, and that’s really not the case. Just don’t be that person who claims to have made something that was store bought. Claiming credit for things you didn’t make is never cool. And cosplay for yourself. If a group of friends ask you to do a character for their group and you like that character, then great! But cosplay is expensive, and a pretty big time commitment as well. Don’t cosplay a character you don’t like just to make your friends happy. There will be plenty of other cosplans you can make with your friends.

What is one thing the cosplaying community can do better when it comes to dealing with each other? Stop being really petty? I haven’t been involved in much cosplay community drama, but from what I’ve seen of it, it can get really bad rather quick. Like, it’s okay if someone else cosplays the same character as you. It’s okay if someone doesn’t have the same skin tone, or the same body shape as a character. It’s cosplay, not a competition. Oh, and if a person wants to dress as a more sexual character, let them? And don’t then try to act pervy around them? It’s really annoying and needs to stop.