“And the Child Shall Lead Them”:Lessons learned from The Book Of Henry

As a child, I was solitary and self-sufficient. I had no siblings and my mother (not due to a lack of effort) was a single parent . I was also of above average intelligence. Not a genius, by far, but I preferred to have a book in my hand as opposed to the TV remote. We moved around a lot; making my social skill set even more difficult to utilize. If nothing else, I was a good listener. I would sit still and be quiet while my mother mentally and emotionally processed her (failed) relationships. I thought I was the only person in the world with a life like this.

Until I watched The Book of Henry.

Set in upstate New York, single mother Susan Carpenter (Naomi Watts) is trying to raise her two children; the eldest son, 11 year-old Henry (Jaeden Lieberher) being of an exceptionally high intellect. It appears that due to Henry’s self-deigned precocious mental acumen, the family dynamic is reversed. Henry being the leader and maker of all executive decisions within the household, and Susan relying on Henry should she not cover all the the basics when it comes to “Adulting”.

Henry shows great inclination as an engineer and inventor; he works smart, plays hard and looks out for his mother and little brother (Jacob Tremblay). In spite of how advanced he is academically, he is still just a young kid with a crush on the girl, Christina (Maddie Ziegler) who lives next door….who he discovers is being sexually abused by her stepfather (Dean Norris). The film unfolds as Henry devises an intricate plan to save Christina in which he enlists his mother Susan to assist him. 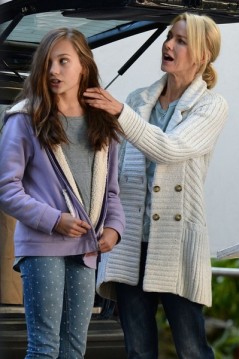 It has been said that the hardest films for directors to make are those involving children and/or animals. Colin Tremorrow clearly does not let that adage daunt him, as the young actors in this film take naturally to the subject matter with a maturity for which we as adults rarely give children credit. Stepping away from sci-fi and handling real life issues, Tremorrow has proven to be a risk taker in directing. Jaeden Lieberher succinctly executes his role as a young genius with the knowledge of the world’s imperfections heavily upon his shoulders. Maddie Ziegler, a reality star that was documented as an aspiring (now successful) professional dancer makes her feature film acting debut as Christina Sickleman, and approaches her role with full understanding of its supporting nature in the plot – yet holds her own as an actress. She pulled all the right lessons as performer in dance and effortlessly carried to to the big screen. It is hoped to see more from her in her future acting projects. Tremblay, though the youngest of the main cast with a highly extensive resume that belies his 10 years maneuvers well in the film; providing the innocence of childhood along the quick wit that only common sense provides. Watts, as a the lead protagonist with an impressive resume was smart enough to let all of these talented children lead the way in this film; which only made her performance  stronger.

This movie was shockingly nostalgic for me and triggered flashbacks – good and bad – of my own childhood. The lesson that I walked away with:

Although the biblical adage, “And The Child shall lead them” rings true, it still remains that even the best leaders still need guidance.

Let your kids be kids, folks.