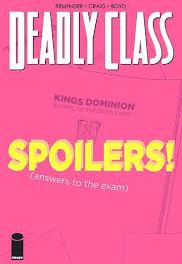 Since the big reveal in Issue 26, every issue of Deadly Class has felt like a long “trip.” I am constantly finding myself doubting what is real and what is not, and Remender is playing with those expectations in this issue.

I must say that the emotional potency of this second year is still lacking when compared to the first. That said, it is picking up steam. This issue successfully adds emotional stakes again by taking time to check in with the internal life of the characters. It felt like the heart of the series was really starting to beat again. The action of the series is truly only half of the equation when it comes to Deadly Class. In the description, “High School for Assassins,” the important part is surprisingly high school. It was watching Marcus go through all of the same self-doubt and realizations that many of us went through in high school that really allowed this book to connect with its audience. The return to being connected to how and what these characters thinks in that growth is a much welcomed return.

The issue plays out in four acts. Each act has its own distinct flavor and color scheme which really sets the mood. Craig and Boyd are really masters of allowing their choices to reflect the tone of each scene while still maintaining an overall aesthetic cohesion.

Craig’s panel work here is at its best. The use of oddly shaped panels are always used sparingly enough that when they occur it still has its charm and intrigue- painting mood and adding drama. The point of focus here is also spectacular with his close-ups and sequences bringing intimate emotional moments to life in a still medium.

Deadly Class should be an essential on every comic lovers pull list.

I'm just a dude in my 20's that likes to rant about stuff I like. Mostly comic books and animation. I'm also making my own stuff.
Follow Pop Culture Uncovered on WordPress.com