When Nickelodeon’s Invader Zim went off the air in August of 2006 (after only two seasons), a collective cry could be heard ‘round the internet from all of the stunned Jhonen Vasquez fans. Fans grew to love Zim’s wildly ineffective schemes to gain control over the world, attempting in vain to realize his imperialistic intentions of conquering the planet and enslaving the “stupid, stinking humans”. The antics of not only Zim, but his loveable (and constantly malfunctioning) compatriot Gir, grew to be not only household names, but quotable characters who’ve also had their lines made into ringtones & other sound bites (I had the Doom Song as one of mine for ages). Not being able to look forward to new episodes of that fantastic social satire seemed like the end of an era, and we thought we would never see the likes of it again. Even Vasquez himself trolled fans of the series on his Twitter account, by sending tweets like this one in 2013:

AMAZING NEWS FOR INVADER ZIM FANS: Just had my first ice cream Drumstick in years and it was AMAZING! Also, ZIM is still cancelled forever.

However, all is not lost. A glimmer of hope was just granted to fans of the dark & twisted animated series, as Nickelodeon announced this morning that they will greenlight a 90-minute TV movie about the crazy and bumbling Zim. Jhonen Vasquez is set to return as executive producer on the movie, and fans will also see a few familiar voices return as well. Four of the original voice cast are signed on to reprise their original roles: Andy Berman (Dib), Melissa Fahn (Gaz), Rikki Simmons (Gir), and of course Richard Horvitz (Zim). From what we understand, the made-for-TV movie will see Zim attempt to hatch another plan to achieve his goal of the domination of Earth and its inhabitants.

Such a cult classic returning retains a lot of significance. Invader Zim will join other such Nickelodeon shows like Hey Arnold!, and Rocko’s Modern Life in the list of reboots of their shows. Fans will see Hey Arnold: The Jungle Movie air later in 2017, and a TV special version of Rocko’s Modern Life is reported to be in production, but with no release details set. 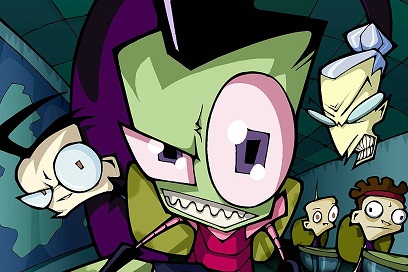 All in all, despite Invader Zim only having two seasons of story material, it really hit home with a lot of viewers, and became a well-loved property for Nickelodeon. To this day, we can see a bunch of Zim and Gir merchandise at our favorite nerd stores, and we continue to quote the show until our friends, relatives, and co-workers hate us for it.

Are you as excited as we are for the return of the “mighty” Zim, dear readers? We”ll be donning our Invader Zim hoodies, clutching our Gir plushies, and watching this thing over & over. How about you? Let us know your thoughts on a 90-minute Invader Zim movie in the comments!