I absolutely loved that game, and it wasn’t just because it was one of the few games we had at the time. No, it was because, unlike Sonic, Awesome could talk! Legitimately speak through the TV speakers at you as you played the levels!

When I was a kid, we were limited on how many and what kind of video games we could have, and that meant that the content in said games was under the deep scrutiny of my wily mother for the first several years that we had a Sega Genesis. Awesome Possum was one of the games my mom approved of with enthusiasm because the box art and back (the full title wasn’t scrutinized) touted the inclusion of trivia about environmental issues. My mom ok’d it after my brothers and I asked about buying it, the three of us boys convinced we’d scored a Sonic game- whew boy were we misled! 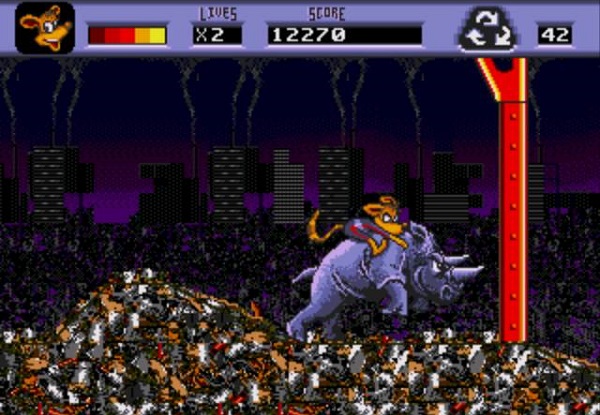 APKDMB, as it turns out, is by Tengen, one of the weirder publishers in gaming history, and a subsidiary of Atari. Born at the point when its parent company was forced to break into smaller companies after they became something of a monopoly in the early days, their list of titles include 007: The Duel and Race Drivin’ among other Atari games that were ported to home consoles. Most of the games were usually good ports, but this game is horrible. The whole thing is a god-awful knock-off of Sonic the Hedgehog in all the worst ways imaginable. From his spin dash move to the super fast speeds and cocky know-it-all attitude, Awesome tried to take all of the major elements of Sonic and blow them up just a little bit bigger, even mimicking the whole environmental protection motif  and making it more emphatic by making you collect trash scattered all across the levels. 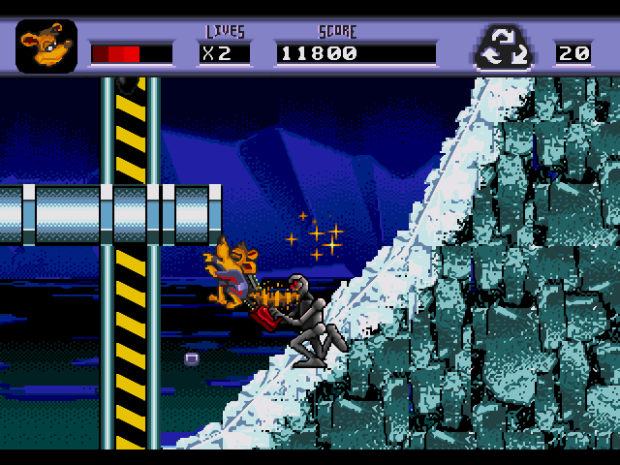 To be fair, they weren’t the first to try a hand at it, and all of that would probably work for it if the game didn’t also have god awful controls, random and inexplicable slowdown, and a myriad of other bugs to somehow make it an exercise in both persistence and futility. Many times when you would jump, it was more of a floating mechanism than jumping, and the hit detection was trash. I remember one of my brothers commented that Awesome was like a demo for a better game in development, and even in my young teens – a time when I was probably a lot more forgiving than I am now – I could see that it was bad. I would shudder at the game every time it stuttered like a freezing possum in the winter. I would dread the awful graphics that took minutes to discern what I was really looking at. I would know that I’d get angry at that underwater level, although you couldn’t drown. The list goes on, and it really should have meant that I held an immense and passionate rage both toward the game and its creators. 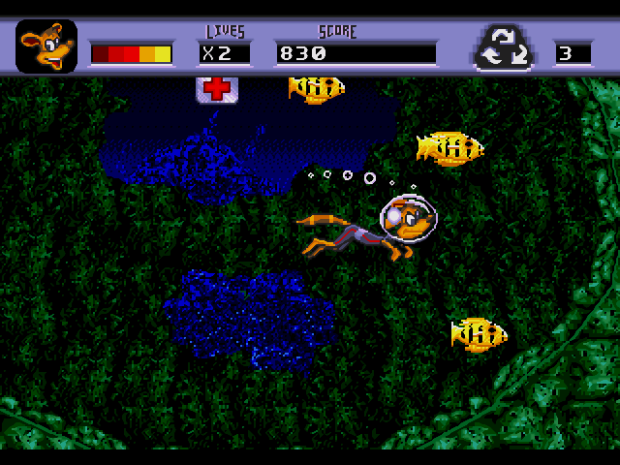 But I loved it. I absolutely loved that game, and it wasn’t just because it was one of the few games we had at the time. No, it was because, unlike Sonic, Awesome could talk! Legitimately speak through the TV speakers at you as you played the levels!

After sliding down a hill and slamming into an enemy and losing a chunk of my health.

Holy crap, Awesome, I just stopped for a second to try and figure out what hellish nightmare of a level I had to traverse.

After stopping to let the slowdown catch up. 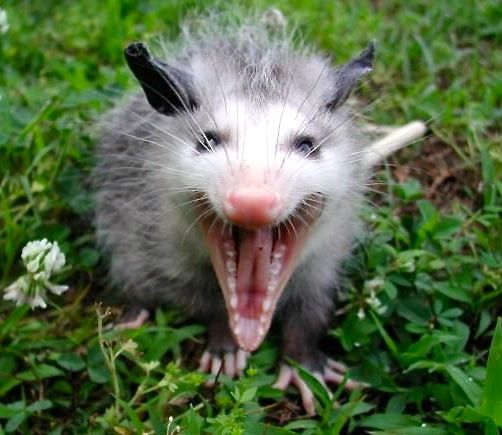 I just stopped to let the stutter stop, and you’re yelling at me seconds after I stopped moving. Harsh, Awesome, harsh!

It was an irrational reason to adore anything so much, but by the blessings of a pure and innocent young heart and a healthy love for the simple things, I was in love with the darn thing. Alas, even this gift was tainted. While the voice acting was unique coming from my parents’ Emerson, a decent but old battleaxe of a TV, the crackly Genesis audio made it hard to understand him sometimes. Being able to recognize what was being said from a cartridge was a novelty that I’ll never forget, though. I loved the fact that he never shut up, and for years his catch phrases would sputter out of my mouth at random.

I also remember how my brothers, utterly unconvinced by my enthusiasm, perhaps even emboldened by it, hated that game with a passion. They clearly realized, even at their young age, that it was an affront to anything fun. The after-level trivia questions that enamored my mom with the game at purchase were more about memorizing the five or six questions and just blindly tapping the corresponding button, a button that never changed during any play through, once you recognized the question at a glance you could answer it without even noting the trivia involved.

I remember playing the game enough to finally memorize how to get through tougher sections of the game, getting near the end, and then just screwing up on the bosses. The bosses themselves weren’t that difficult, but it was the hit detection that was just off. While you were fighting the evil robots – which included underwater napalm firing robots and giant saw blades – it was forgiving, but during those stupid, insipid boss battles every hit had to count against you. Of course, just timing jumps wasn’t enough because most bosses had some form of shield or insta-counter attack once you did bounce on them. So, it was a battle of the wills, who’d smack who at the right moment and who’d give up first when it came to that. Eventually the hour timer I was given for my playtime in those days would win and I’d be happy that I got just a bit further.

I pulled old Awesome back up for a bit on my PC, playing it a little as a reference point for this article and a taste of the old nostalgia pie, and I noted that the animations were really, really well done when it wasn’t affected by slowdown. There’s an animation for Awesome to juggle balls while waiting for you to start moving again, and it’s genuinely well done. So are the animations of the robots coming after you, even if they are a tad basic. The boss animations were really well done too, with sufficiently unique designs, and when you finally reached Dr. Machino, it was neat hearing the final boss yell at you.

But, my favorite part of the whole game was that beating it meant you got to see Awesome Possum actually kick Dr Machino’s ass in all its animated glory. Its title was absolutely lived up to, and I love this game because of it.

Born in Orlando, FL Todd Misura has lived everywhere from major cities to his current home in rural Ohio. He has a wife and two children. Misura is an author who's not easily classified. A writer of genre bending books that are an interesting blend of science fiction, horror, action, and drama, his novels carry you through places we see every day only to discover new wonders hidden in the ordinary. As a opinion piece writer he covers everything from games to current events, and is happy to discuss his and others' articles with you.
Follow Pop Culture Uncovered on WordPress.com