The sixth and final season of Grimm promises to be an adventure, but what exactly will happen to the gang remains to be seen. We have some guesses, though.

We are now one episode into the sixth and final season of supernatural police drama Grimm.  The show, with its humble but loyal audience almost found itself on the chopping block last year, but was granted a final abridged season of 13 episodes. This will, presumably, bring the Grimm world and its unique combination of serialized story arc and monster-of-the-week episodes to a swift close.

But with a large cast and a number of open plots, the question is just how fast can the show wrap things up in time and still make fans happy?

As Nick and the gang rush to clean up the pile of dead wesen mercenaries, newly elected Portland mayor Renard has started a city-wide manhunt for Nick, while their shared baby mama Adalind Schade frets over whom to love and whom to protect.

As with any show rushing to the finish line Grimm is not likely to wrap everything up neatly or in a way that’s going to make every Grimm fan happy.  (I’m just glad they came back to the long-abandoned mysterious keys plotline last season).  But if I was running the betting odds for the rest of the season, it would go a little something like this.

1:1 – Renard dies!  After four seasons of cautious trust building that led to him seemingly becoming a full-fledged member of the Grimm crew, Renard, made a hastily-written and inexplicable heel turn last season in his rise to power – a rise sponsored by Black Claw for … reasons.  Is this all building to Renard making the ultimate redemption by sacrificing himself for his former pals? I sort of hope not, because at this point, I wouldn’t buy it.

1:1 – Renard lives!  Grimm could just as easily go out on a more sinister note, by not going out at all – Angel style!  In order leave the world open to an ill-advised NBC-style miniseries in a few years, why not have Renard retreat to Europe to bide his time for revenge.  And, since he’s already slept his way through most of the female cast already, it’s not outside the realm of possibility for him to seduce Trubel, Rosalee and Nick’s long-lost grandmother too (special guest Betty White!) and run Black Claw from some sinister castle with his harem and daughter.

2:1 – Nick ends up with Eve/Juliet.  The mysterious healing McGuffin stick that Nick and Monroe picked up in Germany seems to have had a serious effect on Eve’s powers, pretty boldly hinting that she may return to her former self, Juliet.  Of course there’s the little matter of the murder spree Juliet went on after gaining Hexen Beast powers – most notably her killing Nick’s mom.  And there’s the small issue of her hooking up with Renard (a plot point which the show writers had clearly been weirdly drooling over since the second season).  Oh, and she burned his aunt’s trailer down!  It’s going to take some serious couple’s counseling to unpack that mess. But even then, Juliet never had a season where she wasn’t some different shade of awful.  Her turn as Eve may be remembered by her ridiculous bob wigs as much as her superpowers, but that’s just about as likable as she gets. 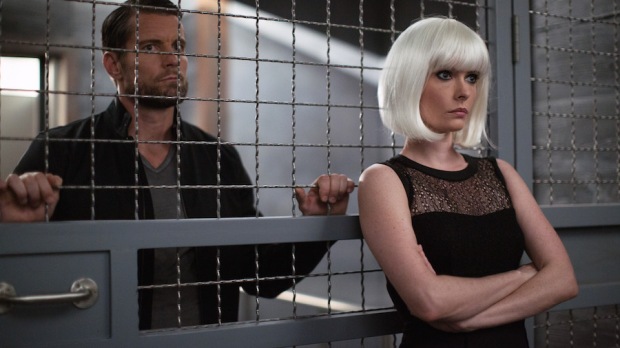 No one is happy with this wig.  No one.

2:1 – Nick ends up with Adalind. I mean if we are going to sweep awful deeds under the rug, why not throw a happy ending to the former villain who only tried to kill basically everyone in the cast list at one time or another.  Oh and essentially raped Nick! (does anyone else remember that?!) Then again with her evil Hexen Beast powers returning, Adalind may be the one in the “noble sacrifice” hot seat.

2:1 – Nick and Hank.  Partners at work. Partners in love.  Because why the hell not?

1:2 – Bad news for Monroe and Rosalee.  From the show’s first season Grimm had a women problem.    Love interest Juliette was such a disappointing harpy character and never got better; Adalind Schade was somehow a simultaneous damsel and femme fatale.  Both got better, but not before Rosalee and later Trubel gave us strong, smart, relatable women and restored a little faith in the writing.  Sometimes the only consistently lovable characters, they kept us afloat for four seasons.  But now, as Monroe and pregnant Rosalee spend so much oime musing about their future, it feel like foreshadowing.  Don’t start picking kid names just yet, guys. It’s the last season – all bets are off.

1:3 – We forgot what to do with Wu! Poor Drew Wu.  His pals at the precinct have used, neglected and gaslighted their reliable junior detective for so long.  Even the writers gave him a ridiculous rhyming name.  They made him a werewolf last season.  Will they even remember to implement that into a story-line this season? Or will he just be fetching coffee and describing crime scenes to the end?

1:1 – Bud dies.  I mean … we maybe should just resign ourselves to this. Bud Wurstner is adored by all, but our jittery lovable beaver is also a pretty easy choice for expendable sacrifice.

2:1 – Trubel rides off into the sunset.  From her first appearance, Teresa Rubel (AKA Trubel) was the the angsty eyeliner-loving wild card Grimm – basically Faith to Nick’s Buffy.  But to our joy, almost immediately she sidestepped that TV trope land mine to become the most duty-driven, hard-decision-making member of the group.  At every turn, even when she has every reason not to, she remains faithful to the gang and Nick in particular.  Why not send her out of Portland to continue her own adventures solo?  Maybe with Wu as a sidekick.  Shit, for that matter …

20:1 Let’s give Trubel her own spinoff show!  It could happen!

As for Nick and Hank, they somehow became the most boring characters on the show that began with them solving nursery-rhyme related crimes oh so many years ago.  Will Nick live? It seems unlikely that he’d die.  Same goes for Hank, whose job for the past two years has basically been telling Nick to watch his back and bragging to wesen that he totally knows what wesen are.  Maybe after all the noble sacrifices, they’ll be left behind with Monroe to raise all these damn kids.  Three Men and a bunch of babies style!

Grimm’s had its ups and downs, but it’s remained faithful to the formula.  Odds on are it will be a great last ride.