Over the past decade, Boom Studios has slowly been carving out its niche as one of the preeminent publishers of kid-friendly comics.  Marvel and DC have the superhero market covered, Image is the adult creator’s playground, and Dark Horse and IDW are largely your go-to publishers for adaptions of major licensed properties. These aren’t strict categories of course—Marvel, DC, and even Boom have their own licensed properties, and Dark Horse has original works. But, by and large, Boom is the place to go try find all-ages friendly comics which are strictly original works.

Boom’s annual Mix Tape book, then, is a good opportunity to sample the company’s many original properties without having to commit to any of them. Because let’s face it: purchasing single issues these days is becoming an expensive proposition, requiring you to spend between three and five dollars, possibly jumping into the middle of a story and likely not getting a complete tale unless you stick around for several months. There’s trades, of course, but an inexperienced newcomer walking into a shop can have a trickier time jumping into a book. Boom’s Mix Tape at least allows a reader to try a little bit of everything, and not just the popular books like Lumberjanes and Goldie Vance.  A little bit of the obscure is included as well, including James Tynion’s Backstagers and Pamela Ribon’s Slam!.

This year’s theme is “music,”so most of the stories find some way to incorporate music into the theme. Working actual music into a purely visual medium like comics is tricky, but to their credit, several of the creators at least try to get your imagination moving. “Change of Tune,” a Goldie Vance short, has the titular character attending an expy production of Hamilton, so fans of the Broadway hit can imagine that the music sounds something like that. “Music Is Important” features the girls of Giant Days performing an eclectic techno/country/alternative mix, so it probably sounds…awful. The Lumberjanes short “Band Camp” really focuses on, as always, the friendship of the characters in their home away from home, so the music—which is intended to be awful—is ultimately secondary to the story. But they’re all fun in their own way, and ultimately the nonexistent sound is left to the artist’s communication and the reader’s imagination. 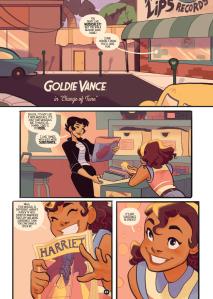 Mix Tape includes a few other shorts, some several pages and others just a two-page sight gag. (Anna Strain’s Christmas cards are a pretty good sight gag.) At $10, Boom’s Mix Tape may seem a bit cost-prohibitive, but with the holidays around the corner, the book may actually make a decent gift for a young reader who wants to try out some original all-ages comics.