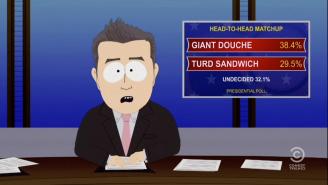 Like The Simpsons, South Park has been on the cutting edge of both pop culture and current events for decades.  Suffice it to say, it is no surprise that SP changes the script on a dime.

We open with Mr. Garrison winning the election, except for Fort Collins, CO, which has been hacked. Everyone’s internet history is at risk. Kyle’s dad is an unfortunate victim of his questionable browser history, but Turd Sandwich (a certain former Secretary of State) enlists him into the secret service of espionage. Da da dummmmmmn!

The Force Awakens is Best

Caitlyn Jenner has convinced the world that J.J. is best, but is it a diabolical plot to take over the world? Yes. Yes it is. And Randy Marsh is at ground zero.

Holy shit, the Bills (Clinton & Cosby) Gentlemen Club. I can’t even….Stan and Wendy try to reconcile but Butters has none of it.

Hillary has trolled the Danish and it might be the end of….Rick Astley? But what is the end game? Only time will tell..

South Park continues its satirical deconstruction of pop events, but damn, it’s confusing and all over the place. Having 12 hours to flip the script shows in the end result with a muddled mess. Nice try.