Just a bit of disclosure, I am amazed at how long some things from my childhood and teen years have been around.  Conversely, I am not always a big fan of reboots and re-tellings, but every once in a while a good one comes out.  Truth be told, when I look at the new variations of G.I. Joe and Transformers that have come about in the past few years, I can’t say that I much cared for them.  When the new Netflix series, Voltron: Legendary Defender was announced, my judgement was reserved until this past weekend. I may have only had time for 4 episodes thus far, but I noticed something very subtle that many may not have seen, and when it’s done right, it shouldn’t be blatantly noticed.  Voltron: Legendary Defender has a diverse cast both on screen and behind the scenes. 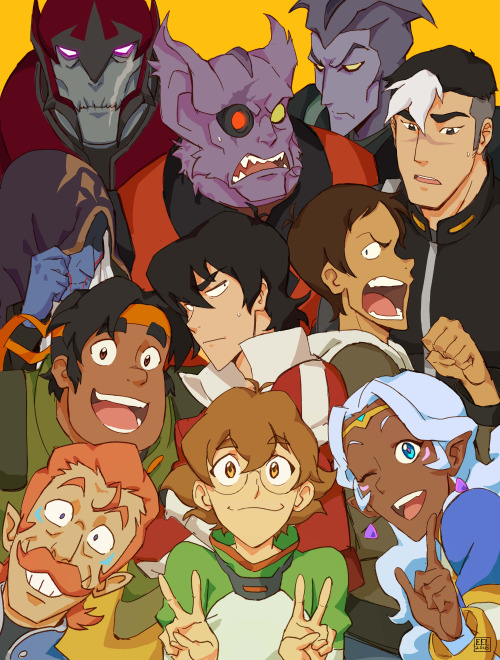 The biggest, yet most subtle, standout is Princess Allura.  She is a woman of color and a change from even the original series version. Even better was that DreamWorks and World Events Productions, went the extra mile by casting Kimberly Brooks to voice Allura.  Allura is no longer the blonde haired, blue eyed princess of the original series.

In an interview with Inverse, Ms. Brooks was quotes as saying:

“I had no idea what Allura was going to look like when we started recording, so when I saw her for the first time [during] ADR (audio digital replacement), I was blown away.  I know this is an alien character, but I welled up with tears when I saw [her]. She’s beautiful, strong, she represents the broader picture. I feel proud to be a part of it, I’m happy to represent.”

Also if you look at Hunk (as voiced by Tyler Labine)  in this version, he is shades darker than his predecessor in the original series. Not much is known of his background as of yet, but clearly aside from his size and appetite, that is the only change from his original character. With Allura’s and Hunk’s changes, along with how the characters are treated, it’s great to see that these characters are heroes who have depth that goes well beyond their appearance.  Simultaneously, this gives viewers, especially those of color, characters they can relate to and be proud of.

If one chooses to really dig into the casting, it’s wonderful to see how diverse even the voice actors are.  Aside from Kimberly Brooks, you have the venerable Cree Summer as Witch Haggar, you have Steven Yuen (yes, THAT Steven Yuen ) as Keith and New Zealander, Rhys Darby as Coran.  Lastly, Sven from the original series has been renamed Shiro, which may denote Japanese ancestry.

Let me clear this up before going too far in. I already know that a few people reading this will ask, “Why is this so important?” or “Why must race be forced into the issue?”  For many people of color, it’s a very simple answer.   Fans of anime and even animated shows in general, rarely get a series where people of color are main characters.  Rarely do we get characters that come off as strong protagonists like Allura, let alone voiced by a person of color. Too many times, POC characters in anime series are either background characters or stereotypes (I am looking right at you Mr. Popo) that don’t fit in our culture.  Thus, it’s refreshing to see Allura’s character being handled as someone who is a strong leader and not one as a damsel in distress that takes so painfully long to come into her own as she did in the original series. As a matter of fact, let’s defer to Wikipedia (this one time it’s actually good for something!) for a description of how truly awesome she is.

In Voltron: Legendary Defender Allura appears as a young woman with a darker skin tone, white hair, and pointed ears who is the last known surviving female Altean, having spent 10,000 years in stasis on Arus. Her attire her varies between a blue and white dress and a black and white jumpsuit with pink highlights (undoubtedly a reference to her original series attire). She has various abilities, including the ability to change her size, increased strength, and manipulate mystical energy.

From a cosplay stand point, this is a huge step forward.  One of the reasons cosplay-wise is nearly the same as it is for characters of color showing up in anime.  Allura’s re-imagining for the new series gives women of color a character that they can cosplay without being asked if they are “the Black version of…” whatever character they want to play.

There is also a young lady,  Yakfrost Cosplay who is already planning out her Allura cosplay and is doing justice to it.

Many non-POC cosplayers do not realize how uncomfortable it is for many of us who cosplay traditionally non POC characters to be asked if we are doing a (insert race here) character.  We are just doing THAT CHARACTER!   With Allura being added to the growing lexicon of characters of color, cosplayers now have someone they can aspire to portray without fear of being asked what version they are doing.  This updated Allura is someone who is strong-willed and an able bodied leader and that is not something that a lot of us get to see.

I applaud DreamWorks and World Television Productions for going all out to make this new version of Voltron so diverse inside and out and something that is accessible and relateable to everyoneone.