A new controversy is breaking in the world of entertainment today as Esquire Magazine and other sources are reporting that actor and SNL alum Will Ferrell has been cast to play the late president Ronald Reagan in a “comedy”. Now, one might think that this is no big deal, as Reagan was much lampooned (as all presidents are) during his presidency. Ferrell, in fact, was well-known on SNL for his portrayal of former president George W. Bush. The controversy comes when you hear how Ferrell’s portrayal of Reagan is being approached.

As confirmed in Variety, the concept for the film is that Ferrell plays Reagan in his second term, in the early stages of Alzheimer’s.  As the President slips further into dementia, “an ambitious intern is tasked with convincing the Commander-in-Chief that he is An actor playing the president in a movie”. Yes, you read that correctly. Members of Reagan’s family are understandably furious, as are advocates for victims of Alzheimer’s and their families. Michael Reagan took to Twitter to express his anger and frustration: 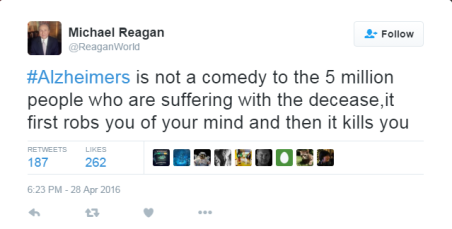 Reagan’s daughter Patti Davis wrote a powerful and emotional open letter to Ferrell on her blog, calling him out:

“Perhaps you have managed to retain some ignorance about Alzheimer’s and other versions of dementia. Perhaps if you knew more, you would not find the subject humorous.

Alzheimer’s doesn’t care if you are President of the United States or a dockworker. It steals what is most precious to a human being — memories, connections, the familiar landmarks of a lifetime that we all come to rely on to hold our place secure in this world and keep us linked to those we have come to know and love. I watched as fear invaded my father’s eyes — this man who was never afraid of anything. I heard his voice tremble as he stood in the living room and said, “I don’t know where I am.” I watched helplessly as he reached for memories, for words, that were suddenly out of reach and moving farther away. For ten long years he drifted — past the memories that marked his life, past all that was familiar…and mercifully, finally past the fear.

There was laughter in those years, but there was never humor.”

As a child of the 80s, who grew up under the constant threat of imminent and total nuclear annihilation in Reagan’s America, I am no fan of Ronald Reagan, but this is simply beyond the pale. Alzheimer’s is never a laughing matter, and I am disappointed in, and disgusted by, Will Ferrell’s choice to be involved in a project like this. I truly hate to say this, as it is a bit of an overused trope, but if this was a film about a left-leaning public figure, the outcry would be swift and deafening from the left. It is early on in the public awareness of the story, but I have to hope that people on all sides of the political spectrum will be able to put aside the “who” of the story, and focus on the complete lack of empathy and common sense on display by the actors, writers and producers of this project.

It is been said that in comedy no subject should be off-limits, and no person should be out of bounds.  However, just as one would not do a comedy about child molestation, rape, or famine (just to name a few), I find making light of Alzheimer’s to be disturbing. Many on the right may choose to try and politicize this and make this story, this outrage, about Reagan, and about the “left-wing media”, but is not. This is about our humanity, and about our capacity for empathy for our fellow man. Anyone who has had a family member, or knows someone who has suffered through Alzheimer’s, would not likely ever find any comedy in such a sad and horrific end.

I have (to this point, at least) been fortunate enough to not have Alzheimer’s affect my family directly.  I have, however, had friends whose family members have struggled with it.  I can tell you, it is terrifying, frustrating, emotionally devastating, and dehumanizing. Head on over to alz.org, and read some of the personal stories of those with Alzheimer’s as well as their family and caregivers.  Then tell me that there is something humorous or comedic about this insidious disease. I, for one, can only hope that those involved will hear the outcry and realize their error. If this movie gets made, I certainly will not ever pay to see it, and I imagine it could very well be career suicide for whoever is involved with it. Time will tell, and hopefully humanity and empathy will prevail.

UPDATE: According to pagesix.com and others, Will Ferrell has announced that he has withdrawn from the announced Reagan “Comedy”. From foxnews.com:

“The ‘Reagan’ script is one of a number of scripts that had been submitted to Will Ferrell which he had considered,” the actor’s rep told FOXNews.com. “While it is by no means an ‘Alzheimer’s comedy’ as has been suggested, Mr. Ferrell is not pursuing this project.”

Jonathan "Evilboy" Wolk is a married father of one and owner of Used Future Workshop. He makes replica props and displays for costumers and collectors and is a proud member of the 501st Legion. He has been a contributor to Pop Culture Uncovered since 2013.

3 Comments on Outcry Over Will Ferrell as Reagan: Alzheimer’s is not a punch line. UPDATED