Fun, Competitions, Music, Virtual Reality, Robotics, and oh yeah; those amazing things called video games and more, are blended together in this highly collaborative convention that showcases some of the best indie and professional artists in the DMV area. Creator Con 2016, which just finished it’s 3rd year is hosted at James Hubert Blake High School in Silver Spring, MD. Creator Con not only mixes the fandom, exposure, and the selling of art and comic books, but brings with it educational and networking aspects as well.

Attending Creator Con for the first time I was extremely impressed by how well the event was organized, where the students at Blake HS ran all the behind the scenes operations. Which speaks volumes considering the event had an upwards of 500 people in attendance! Creator Con is a highly interactive event for a community of all ages!

“This innovative spring festival that combines a comic book convention, technology exhibition, and career fair. Creator Con aims to connect both industries with communities in the DC, MD, and VA area.

Creator Con is founded by Derek Ritzenberg and Co-hosted with Eric Suggs Jr. of Artway Alliance. 2016 Creator Con is an interactive festival that brings together the video game, comic book, and education industries to inspire all ages.”

Combining indie and professional artists from all over the DMV in order to teach, enlighten, and connect with students and the community alike by selling their art, giving demonstrations on their techniques, and teaching various skills of comic book creation or networking with other artists. This is the main expo area featuring artists and guests vendors.

A major difference I gathered from folks at Creator Con was how synergetic the educational aspects were of the event, rather than just a collection of fans looking to celebrate their favorite comics, art, or anime. Giving the artists and guests the platform to share their knowledge to the youth in a creative and collaborative environment, where everyone can engage and have fun! Guest attendees for the event included Artway Alliance(event co-sponsor), Third Eye Comics, GameTruck, Single Digit Studios, and many others.  See the full list at Creator Festival.com!

“AWA works through classes, events, conventions, and partnerships with wonderful and dedicated artists and volunteers to accomplish this undertaking” is a non-profit with a focus on teaching kids and students alike, artistic skills in a encouraging environment. Partnering with independent and high profile artists alike from The Art Institution of Washington, all with various talents and unique expertise who share a deep passion for teaching and exploring The Arts with children. 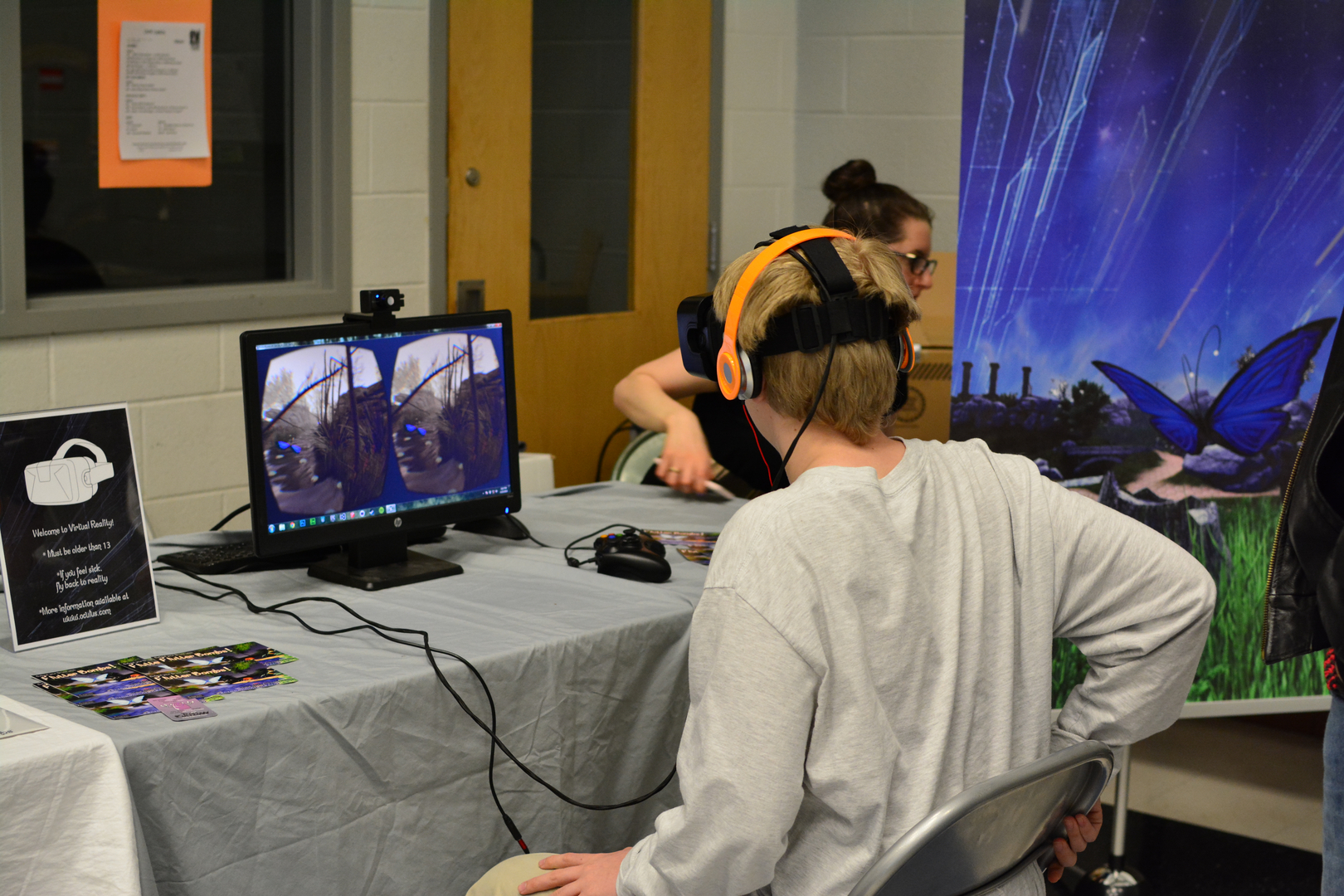 A great deal of vendors had booths or programs dedicated to not only playing a myriad of games but teaching how games are created, developed, and designed..I mean who doesn’t love virtually unlimited gaming for 6 hours, but also how cool is it to learn how to make one too? Key participants were T.A.G. Labs

Held in the amphitheatre, presentations included:  Creating Video Games: Programmer vs Designer, Crafting A Career In The Media Arts Industry, Diversity In Cosplay, and Pathways To Creativity with Mark Teare from Bethesda Games Studios. (click for interview)

Moving onward throughout the Artist Alley, where demos and artists booths were held in the cafeteria after the event kickoff, which trailed far into the parking lot, activity ramped up right at 2pm. I struck up a conversation with the artist behind Hivemind Comics.

Jordan Clark, who shared some of his favorite parts about Creator Con is how the students are involved with the event. Saying that a major incentive for local artists choosing to attend Creator Con is that it’s all around more cost effective than other conventions, creating a more inviting atmosphere. His Hive Mind Comics which is a Zombie comic with a twist. Holds the perspective of humans having always been kind of number 1 on the food chain, but as the zombies eat people they start to become smarter and smarter collectively, so at some point they become as smart as humans. Playing on the theme of survival of the fittest.

Jordan got started in comics early in his childhood and a former student of Blake HS. Studying Journalism while in college, but his true passion geared him back towards doing comics. Where he loves the whole aspect of creative control. As an indie artist Jordan enjoys the level playing field of exposure that Creator Con offers versus some of the larger events that feature DC and Marvel.

“I think comics now versus in the 90s, there’s a lot more openness in the market. There wasn’t the internet or different avenues to get your work seen. Where now there’s people who have comics everywhere online in digital marketplaces like Amazon. With the internet I can reach anyone all over the world.”

Check out Jordan’s comic series and other artististic pursuits via his website @ Jclarkcomics.squarespace.com

Jake Heagy is an artist that is attached to Artway Alliance… who’s been doing conventions for about a year and a half. Where at Baltimore Comic Con he found it to be a really cool event to continue doing to showcase his art. A measure of success with his experience at Creator Con Jake shared, was him having a conversation with a student sitting next to him. Where Jake gave him advice on how to be successful at other cons and sharing with the student other AWA artists he can connect with to learn more.

“With Creator Con being in a school, it’s very kid oriented so It’s a lot more conversations with students talking about Art, which to me is more important than just selling, it’s educating the students as well. With Artway Alliance I band together with some of the Artist that are at Creator Con and we educate kids on how to become more involved in art and how important it really is, an Artway Alliance Philosophy. Specifically I teach Animation classes with AWA.”

Check out Jake Heagy’s Art Page on Facebook and his AWA Profile!

Some of Jake’s artistic experience has led him to do map animations that have been featured in Pearson textbooks. And currently works as a Manager at a Wine and Painting studio in DC. His favorite games and inspirations are games that are very art driven, combining great story and unique character development (He loves Mass Effect!). Jake constantly gains inspiration from his fellow AWA artists who push him to become a better artist!

Continuing reading for in depth interviews and insight on Creator Con 2016: Part 2

— Hi I’m Doni. I Create all things beautiful and love collaborating with other Creatives via Film|Photography|Design|Tech.
Follow Pop Culture Uncovered on WordPress.com