Nearly two years ago, we discussed the news about Scarlett Johansson being cast for Major Motoko Kusanagi in a live action Ghost in the Shell movie and its impact on anime fans and Hollywood.  There was indeed concern as to not only the casting but who was working behind the scenes as well.  Fans dismissed the news back then because there have been many anime to live action Western projects that have been held up in production hell (we are looking at YOU Akira) and Ghost in the Shell seemed like yet another candidate floating some lofty names for a movie that would never get made.

It’s all fun and games until the pictures show up

Thursday of this week showed the first image of Johansson as Kusanagi reigniting the whitewashing argument again.  Fans took to social media decrying the casting once again.  For those that didn’t know, a petition signed by nearly 70,000 people to stop this casting has been circulating for over a year.  Ming-Na Wen, who was involved in another Hollywood casting row earlier this year, was quoted as saying, “Nothing against Scarlett Johansson. In fact, I’m a big fan. But everything against this Whitewashing of Asian role.”  Keep in mind as well that Wen, who plays Agent Melinda May on Agents of SHIELD, identifies herself as Macau-American.

Nothing against Scarlett Johansson. In fact, I'm a big fan. But everything against this Whitewashing of Asian role.😒 https://t.co/VS6r6iish9

Jon Tsuei, one of the creators of the RUNLOVEKILL comics, stated ”This casting is not only the erasure of Asian faces but a removal of the story from its core themes.”

Ghost In The Shell, while just one film, is a pillar in Asian media. It's not simply a scifi thriller. Not to me, not to many others.

Is it Asian Erasure?

This is where things really get muddy.  Depending on whom you ask, there are those that believe many anime characters have Western characteristics, some that are drawn neutral and some that really are Japanese.  What is interesting in the argument against Johansson being considered in this role is that when the question of diversity of other minorities in anime has come up, some have stated things such as, “there is no argument because Japan is really a homogenous country.”  or “You just can’t expect another culture where there are little to no black people to accommodate you when they’re literally having their own issues.”

Or even when asked why anime characters have Western looks, some believe that the Japanese are obsessed with Western culture even right down to beauty.  Ask many well-versed anime fans about the question of diversity and for them it comes right back to the theory that Japan has cultural issues over what is acceptable in terms of how one looks and the impossible standards that they set. Yet and still, many western anime fans rarely make a big fuss over how characters look. Even within the cosplay community, many dress as their favorite characters with very little backlash about the possibility that their cosplay is whitewashing said character.

So, can Westerners really be upset over how Hollywood has cast this movie?  Should Westerners maybe accept the fact that because Japan has adopted Western beauty ideals and pushed them not only into in their anime, but daily lives as well, that Scarlett Johansson’s casting is the end result?  Maybe the question should be how many people upset over this issue have watched not only this anime but anime in general, and understand it enough to really have a handle on this issue and the ambiguous nature of many of the characters.

This is the real dilemma when looking at this casting situation.  It’s very understandable that for something that originated in Japan, some  Western movie-goers would want some kind of Asian representation, but does the character as drawn identify as Asian?  Anyone that has spent enough time watching anime has seen that characters are drawn, in so many ways, with features that aren’t Japanese, and many of those features, including eyes, breasts, hair and muscle tone defy nature as well.  Unless you know what you are looking for, sometimes it’s hard to understand what an accurately portrayed Japanese person is supposed to look like in an anime. 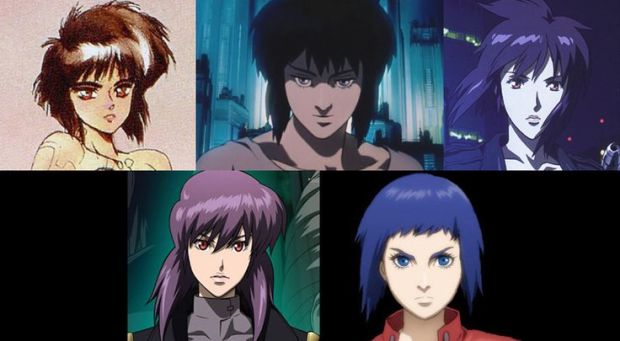 This gets more bogged down in Ghost in the Shell and Major Kusanagi. From an anime perspective, the character has been drawn a bit differently over these past 20+ years. From a Western perspective, appearance-wise, there is nothing distinctly Japanese about Kusanagi.  The biggest problem with the character and casting is that, for anyone that knows the history of Kusanagi, while at some point she was human, she now occupies a cyborg body, one of many that she has had over the years during the course of the manga and anime series as well.

Unfortunately this gives Western movie makers the very flimsy, thin as melting ice, excuse to cast a Western actress in the role when they could have cast a suitable and credible Asian actress.

Many would have thought that by now, Hollywood would have learned its lesson after the backlash against Exodus: Gods and Kings, the box office flop that was Gods of Egypt (Lesson: Casting white people as lead actors in ANYTHING having to do with Egypt in this day and age will result in certain failure) and there are even misgivings about the new Dr. Strange movie as well. As this project moves forward, that does not seem to be the case.  Hollywood has not really had a strong record with Western films being made from anime and manga.  One of the last high profile films, Speed Racer cost $120 million to make and only made $93 million worldwide.  Even more recently, Spike Lee’s Oldboy remake was a $30 million dollar movie that only made $4.8 million worldwide.

If this trend continues, and fans continue to vote with their dollars, then it’s not looking good for either Naruto nor Ghost in the Shell.

The question that still needs to be asked is, while there is a very strong case (yes, it’s really evident without question) for whitewashing in Ghost in the Shell as a Western made movie, who is really at fault for creating the problem?  Western culture and norms or Eastern culture for adopting it, thus making something for the West to adapt?

Update:   Here is a video that shows a sample of what some Japanese people had to say about the casting.  Some of their answers may surprise you.

Let us know in the comments below if you will or will not support this movie.

5 Comments on Ghost in the Shell: Is this really a case of whitewashing?