First name and last initial:  Corey M
Where are you from: Originally from White Plains, NY.  Currently living in Upper Marlboro, MD
How long you have been cosplaying:  About 8 months now.
Characters cosplayed: Mr. Terrific, Captain America,  I’ve body painted myself as Wolverine and the Falcon and I couldn’t begin to name the superhero masks I’ve simply painted on my face.
Website or facebook fan page:  Straight Outta Cosplay

Being a comicbook nut my whole life, I’ve been to a few cons and always liked seeing the work that the cosplayers put into their costumes.  Some of them were awesome in how realistic they were.  I always had it in the back of my mind that one day I’d like to wear a costume of my own.  Maybe Falcon or Black Panther.  My oldest daughter shares the passion and actually wanted to start making her own costumes.  After her second costume (Photon/Monica Rambeau), I decided to bite the bullet and put together a costume of my own. 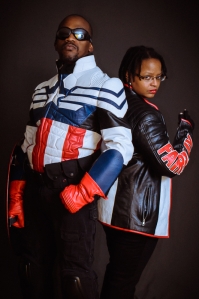 2. What do you do when you aren’t cosplaying?

When I’m not cosplaying, I love to fish, play video games with my daughters and bowl.  I’m also a professional face painter, so my weekends are usually filled with either painting faces at parties and festivals or teaching other face painters how to do comic book designs at workshops and conventions. 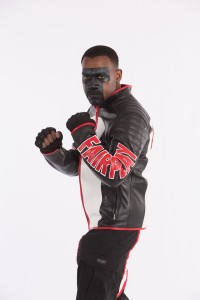 With only 2 complete costumes (so far and not including Lord knows how many masks I’ve simply painted on myself), I’d say that my Sam Wilson Captain America costume has been the biggest challenge, as I’m working on designing the backpack and wings for the suit.  Being new to cosplay design, I’m learning everything for the first time, so it’s a bit tricky.

The biggest reward has to be my Mr. Terrific costume.  I was blessed to be able to get a jacket that is picture perfect to the pre-New 52 Mr. Terrific. Along with my daughter we were able to complete the costume so that it is identical to the comic book character.  The reward has been the looks on people’s faces when they see me in this costume, as it’s not a well known character or one that is regularly seen being cosplayed.

Just about every character is someone’s favorite.  And it’s a great feeling to be stopped by people who are really psyched that you are cosplaying their favorite character.  Just being able to take a picture with you or to speak with their favorite character does an incredible amount of good for people and means more to them than you may realize.  Putting on that Mr. Terrific costume and seeing people light up because you made their convention experience that much better, is the biggest reward I can have.

4. What is the best advice you would give a POC (Person of color) person new to cosplaying?

Don’t be afraid! Don’t let your race, your size or for that matter your gender and ESPECIALLY other people’s opinions stop you from cosplaying a character that you’re interested in.   Be confident that this is YOUR character regardless of your race, or the character’s race.

Understand and believe that you have as much right to cosplay as ANY character as anyone else.  Be confident that you can put that costume together, and that you can be whoever and whatever you want to be.  Don’t let other people’s attitudes or their opinions as far as what you can and can’t play, stop you from doing what you love.   In the end, the people saying that you shouldn’t do it, are speaking to their own insecurities and limitations.  Not yours. 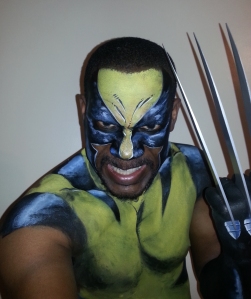 The cosplay community is like any other community, in that people naturally develop hierarchies, cliques and status levels to distinguish themselves from each other or set themselves apart or above one another.  Even in a community of nerds and geeks (of which I’m proud to call myself a member) who know firsthand what it means to not be accepted, we have begun to find ways to not accept each other.

The cosplaying community needs to eliminate the walls that dictate what is and isn’t cosplay or who is and isn’t a “REAL” cosplayer.  Some people can build an outfit completely from scratch.  Others may not have those skills and may need to order theirs online or purchase it from a store, or have someone else make it for them.   Some people’s outfits cost several thousand dollars and are made with the most expensive materials, while others are made on a shoestring budget with cardboard and craft paint.   To me, each of those people are a part of the same club, and should enjoy the same support and love from the rest of the community.    There doesn’t need to be levels of cosplay.  We’re already separate from everyone else.  We don’t need to be separate from each other.

Some of us are too serious about what we do, forgetting that half of cosplay is PLAY.  We need to get back to that.

Ashley was raised on sci-fi television shows and movies, the Adam West version of Batman, and all those marvelous 90s Nickelodeon cartoons. She’s a Jersey girl and an avid Philadelphia sports fan, but has never once thrown batteries at a baseball player, or snowballs at Santa Claus. Ashley is also a triathlete, marathon runner, hiker, and occasional dog walker, mostly so she doesn't have to watch what she eats.
Follow Pop Culture Uncovered on WordPress.com