Countless scripts are floating around movie studios at any given moment. Many get made into the films we see in the multiplex while enjoying our favorite snacks and sodas. More end up being rejected, and never get to see their story pass from paper to film. Most people don’t spend much time thinking about the scripts that never get produced, but most people are not fanboy and filmmaker Jon Schnepp. Schnepp became intrigued with the story of Superman Lives, a late nineties attempt at rebooting the dead film franchise, unseen since 1987’s mega bomb Superman IV: The Quest For Peace. Unlike many of these unproduced scripts, Superman Lives actually was well into pre production and casting when Warner Brothers pulled the proverbial plug. Schnepp’s documentary is the story of the project’s beginnings through it’s end.

Schnepp interviews many key players involved in the film, from original screenwriter Kevin Smith, to the man picked to direct, Tim Burton. Smith explains that during a meeting with WB brass about possibly writing a sequel to Beetlejuice, he unexpectedly was given a chance at writing Superman, his dream as a comic fan. Despite battles with producer Jon Peters, still fairly fresh off of his success with 1989’s Batman, Smith was able to craft a script that was considered good by many at the studio. Smith claims that Peters gave him several rules while writing the script, such as Superman could not fly, nor wear his recognizable costume. Peters denies this, but does come across as a bit of an eccentric during his interview segments. Once Tim Burton was hired to direct, Smith’s script was thrown out, and would be rewritten over the course of the next couple of years by two more screenwriters. The overarching theme of all versions of the script was surrounding Superman’s death at the hands of alien villain Doomsday, loosely based on the events from the DC comic in 1993, as well as his resurrection. Many great concept artists were hired to storyboard and design visual elements for the film, and one of the best parts of the documentary is seeing some truly great unused art.

One of the biggest bones of contention with fans at the time of this production was the casting of Nicolas Cage as Superman. Cage is never interviewed for the film, but is shown through archival footage during costume fittings. Cage, a lifetime comic devotee, seems excited to be doing a different, more alien version of the character than seen before. The scenes with him are surreal, because it is not often that you get to see the “almost” moments that never make it to film. Also, Cage in a long black wig is distracting, but to fend off the haters of that look, that was also the look Supes displayed in the comics post resurrection. On that note one of the victories that this documentary pulls off for Superman Lives is that it puts many of the leaked photos and videos that have been seen online into context with the story. A much viewed video featuring a translucent, light up Superman suit that many assumed was to be his main costume, is proven to have been intended to be seen in about two minutes of film, during his regeneration sequence. Another laughable photo of Cage with his eyes shut during a costume test is just one of many taken, but the only leaked.

There are many more great nuggets of information in this film, and it made me sad that whether good or bad, I will never get to see what surely would have been a different Superman film. Schnepp elicits this general feeling from most of his interviewees as well, that they still feel a twinge of curiosity as to what could have been. In the end, upwards of 12 million dollars was spent before WB cancelled the production, much of which went to Burton and Cage’s salaries, based on their pay or play contracts. Expensive flops such as The Postman and Batman And Robin put the studio into crisis control mode, and a new film in a dead franchise directed by and starring a pair not considered an ideal fit for the material was considered an unnecessary gamble. After shuttering the film, the remaining budgeted funds were funneled into the next project WB execs deemed a sure fire hit, the Will Smith vehicle The Wild,Wild West. Really. 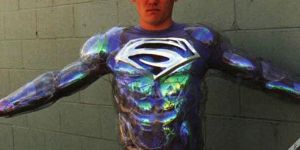 Schnepp did a great job with this film, a truly worthwhile watch for movie fans, comic readers, and really anyone interested in how a script gets made, or in this case, almost made into a film. The insights from those involved are interesting, and getting to see the skeleton of the story take shape and how different elements were excised or added was fascinating. The only critique I had was there are a few scenes using actors in costume interpreting scenes from the script that came across as a bit hokey, but there were so few that it did not impede my enjoyment. If you have an interest in seeing this film, you can find downloadable or physical copies on sale here…http://www.tdoslwh.com