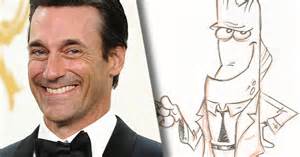 Jon Hamm has been confirmed to guest star in an episode of Nickelodeon’s SpongeBob SquarePants.

Jon Hamm, fresh off his Emmy Award for his work on the final season of Mad Men, will lend his voice to the hit Nickelodeon show SpongeBob Squarepants. He will play the role of Don Grouper – a charismatic head ad executive of the ad agency Grouper, Goby & Koi. His sharp mind and devastating charm make him an irresistible force. When Don’s in the room everyone laps up his words like overpriced organic honey. In the episode, Mr. Krabs goes to Don for help as Mr. Krabs tries to launch his line of frozen Krabby Patties.

The episode is scheduled to air in 2016.