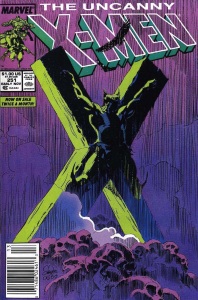 Covers are the first thing you see on a comic. Simple. The cover could very well be enough of an eye catching tool to get you, faithful reader to plunk down your hard-earned money. This new segment will feature some of our favorite covers here at PCU, and give you a look into why we chose these particular issues.

Uncanny #251 is not only a beautiful example of cover art by Marc Silvestri, but it also holds personal nostalgia for me. Cover dated early November of 1989, this issue falls in what I consider, my era of X-Men. Depending on age, or when you started reading a long-standing book, most readers can identify with one particular time in a series’ run. The X team hiding out in Australia, hanging with teleporter Gateway and fighting the Reavers is the point that I read with the most fervor. The image of Wolverine, crucified to a wooden X and left for dead, was and still is a powerful image. The obvious comparison between the mutant plight in the Marvel U and Jesus Christ’s story have never been so closely portrayed than here. His face hidden by shadow, he is easily identifiable by his unique hairstyle. Situated on a pile of skulls and bones, a vulture circles overhead, waiting to add to the mound’s tally. The true highlight of this simple cover, is the coloring. A purple background offset by a bright green used to accentuate the cross give this image an ethereal quality, which works well, as much of the issue takes place in a dream.

Marc Silvestri continued being a successful artist in comics to the point that he defected from Marvel a few short years later and helped found Image Comics. I fell out of reading comics about a year after this, as High School life sunk its teeth into me. I always dabbled, and about ten years later picked up the old habit like it was just yesterday.