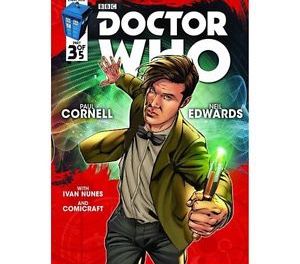 For over 50 years Doctor Who has been a British mainstay and a cultural phenomenon. There are uncounted Whovians around the world that devour anything Doctor related and I count myself amongst those fanatics. It is especially interesting when we get to witness various versions of our hero from Gallifrey. Lucky for us, Titan Comics is in the midst of a 5 week special series Doctor Who: Four Doctors. From the mind of acclaimed British author and Hugo Award winner Paul Cornell comes an action packed tale of the Tenth, Eleventh and Twelfth Doctors joining forces to spoil a sinister plot by the Voord, the amphibious precursors to the modern Cybermen.

Our story picks up on Marinus with our heroes and their always faithful companions under attack by laser fire. The gun fire is aimed at them from outside of space-time which could only mean big problems for our time travelers. The group gets separated; but quickly joins back up at the center of a well crafted Voord maze which contains a terrible sight, a Continuity Bomb. The bomb is designed to alter a person’s timeline, changing a critical decision, therefore changing all futures and this bomb is specifically designed to change a Time Lord’s reality. What the Voord did not expect of course was for the bomb to explode with three Time Lord’s in its wake so rather than change the past the weapon instead shows the change of choice to the group and the resulting alternate future. Classic moments from the television series are shown and it is engrossing to see what would have been if the Doctor forsook the selfless path. The issue ends with a cliffhanger expertly crafted that promises to make the final two issues must read material.

Paul Cornell has had an esteemed career as a screenwriter and author of both fiction and comics. He has a long history of writing Doctor Who fiction so it goes without saying that he absolutely nails the storyline, capturing everything that makes the Doctor so engaging. Edwards & Nunes do a superb job creating art form facsimiles of our characters television counterparts. Their style makes the book easy on the eyes and it flows seamlessly from page to page.

In anticipation of the new season of Doctor Who in September, this limited weekly series is the perfect outlet to satisfy your appetite until the premiere and to enjoy seeing our old friends for another adventure.

5 out of 5 Continuity Bombs