Over my many years of being a gamer, I have become an unapologetic completionist.  That being said, I LOVE hidden battles in adventure, RPG, and fighting games.  Specifically, I’m talking about those hidden bosses & mini-bosses that aren’t necessarily part of the main story line, but that offer perks to the gameplay, and extra items/abilities for defeating them.  I’ve gone over my entire (30+ year) history of gaming, and picked out a few of my favorites of all time.

Oh, this guy.  Karstaag was SUCH a headache for me when I first went up against him.  While finding Karstaag was fairly easy, actually killing this beast of a frost giant was definitely no easy task.

To get to him, you must first have downloaded the “Dragonborn” DLC for this game, which adds on the island of Solstheim.  In the northern section of this new area, you came across a location known as ‘Glacial Cave’.  A straight-forward cave, there was really nothing of note except for a few small enemies, and a couple of items.  However, on the back wall of the cave, you were able to collect Karstaag’s skull from where it was embedded in the ice.

Once you had the skull, you needed to take it to another location not far away (Castle Karstaag Ruins), and place it on the frost giant’s throne.  Karstaag would then materialize, surrounded by a permanent frost cloak.  That’s where the “fun” started.

This giant pain in the neck was immune to all frost damage, poisons, and paralysis.  On top of that, the frost cloak that he uses inflicts serious damage to your HP, while also stripping your stamina away very quickly.  His stomps could knock you through the air, and if they didn’t outright kill you, they caused you to have to close the distance to him again, while his health regenerated at a pretty fast pace.  The only way to kill him that I’ve found that even comes CLOSE to being reliable, is to have loaded up on frost-resisting apparel, used weapons that absorb health, and made sure you had the full Dragon Aspect shout, which boosted your armor rating.  On top of that, you almost always needed to use a few big potions to heal yourself & replenish stamina.

If, by some miracle, you were able to finish Karstaag off, you gained the “Summon Karstaag” power.  This allowed you to summon the beast three times for the rest of your playthrough.  After that, the power vanished.

Just about every gamer who ever picked up Final Fantasy VII (arguably the best in the series) encountered Emerald Weapon at some point in their travels through the game.  Huge, intimidating, and one of the most powerful enemies in the entire game (1 MILLION HP, REALLY???), Emerald Weapon posed a serious challenge to even the most seasoned of Final Fantasy players.

From all my experience in playing the game, and everything that I have researched, it seemed that the appearance of Emerald Weapon was pretty random.  He could only be found underwater, and you had to actually crash into him with the submarine.

There really was only one way that I found which allowed me to beat EW with any regularity.  The very first thing, being that all my characters had to have maxed out HP (9999).  I would also always equip Cloud with the Knights of the Round summon materia, and pair it with the W-Summon materia.  Once I had that set up, I would ensure that every other character that I was using had a Mime materia equipped.  This allowed me to summon Knights of the Round twice with Cloud (for the MP price of one summon), and then mimic that action with every other living character I had on the field.  I really enjoyed doing it this way, because KOTR was such an impressive-looking summon, and made me feel like a bad-ass since it regularly did a ton of damage.

Once you defeated Emerald Weapon, he dropped an item called the Earth Harp.  The harp could then be traded in at the town known as Kalm, and in return, you would receive a Master Magic, Master Command, and Master Summon materia.   Totally worth it, in my opinion.  Plus, you got to go tell everyone you knew that you beat this beast – because c’mon; who WASN’T playing this game at the time? 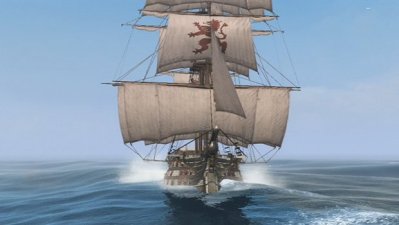 El Impoluto was BY FAR the hardest of the Legendary Ships that were available to battle in Assassins Creed 4: Black Flag.  While locating these ships was not difficult, it was the actual battle that had many a gamer tearing their hair out by the roots.  I know it took me at least 8 tries to beat this particular thorn in my side.

Making this Legendary Ship appear was as simple as traveling to the far northwest corner of the ocean map.  From there, a short cinematic would start, showing El Impoluto as a fearsome & gigantic Man O’ War.  This was occasionally enough to cause many gamers to instantly regret their decision to engage this thing.

El Impoluto’s most fearsome method of attack was an enormous naval ram mounted to the front of the bow.  Most of the time, one single hit from this thing was enough to take out your ship, even if you had upgraded everything all the way.  This ram attack became so much of a headache in the gaming community, that El Impoluto earned the moniker of “Rammy McBitchenstein” on Reddit.

With the fact that the Legendary Ship could deal out this kind of damage, priority one when fighting it was to avoid that ram at all costs.  There was only one reliable way to do that, and that was to fire chain shots at El Impoluto’s masts as it charged towards you at breakneck speed.  If you were able to nail the chain shot, El Impoluto would veer off, and try to regroup.  This was your chance to strike hard at his broadside (while avoiding the volley of cannon fire that he would usually fire off).  As the giant ship attempted to maneuver around you (and we all had to accept that he was faster than our ship), landing a few well-placed heavy shot attacks was a great way to deal out some damage of your own.  In addition, mortars could be used to interrupt El Impoluto’s wide turns.  Once you mastered these tactics, the only thing you had to worry about was preventing this warship from getting around behind you, and could usually be accomplished by dropping flaming barrels into the water behind you.

If you were able to survive this battle, and ultimately take down this massive enemy, it would drop a reward of 20,000 Reales (the currency in the game).  If you were able to somehow win all four of these Legendary Battles, your prize would be an upgrade to your own ship, in the form of the Speed Ram Attack.

I had a serious love/hate relationship with El Impoluto.  On one hand, the elevated challenge was a welcome addition for me, as I’ve been a fan of the series since the beginning.  On the other hand, the level of perceived cheapness I saw, when I kept getting rammed over & over, was possibly the most annoying death I’d ever experienced in a video game.

As master & mentor to Ryu & Ken, Gouken was quite the formidable character.  His list of moves was vaguely similar to Ken & Ryu, but contained some extra power behind each one, making dealing with each move more challenging than dealing with those of Gouken’s students.  Finding, fighting, and ultimately defeating him was also actually fairly complicated.

Getting Gouken to appear as an opponent is arguably the more difficult of these characters.  First, you needed to beat arcade mode as Akuma (who is himself an unlockable character).  Then, while playing through the game again, using any character with whom you’ve already beaten it, you had to get through the entire arcade mode without losing a single round.  Additionally, you needed to perform at least three ‘Super/Ultra Combos’, achieve one ‘Perfect’ round (not taking a single hit), AND get the first hit in at least 5 rounds.  Once you beat Seth (the main story boss), Gouken would appear in a hidden stage.

For me, the fight that ensued was always pretty epic, as Gouken was very deliberate in his movements, and his hits did quite a bit of damage.  If you stayed on the move, paid close attention to when he was attacking, and put pressure on him after knocking him off his feet, the battle went a lot easier.  Beat Gouken, and you not only gained the ability to use him as a playable character, but also earned yourself some serious bragging rights.

Hidden bosses are always so much fun (and usually so much of a headache) to fight.  For us completionists, though, they are almost like a rite of passage.  We feel the need to push ourselves to beat these extras, just so that we can say we did it.  Even if these battles frustrate us to no end, we’ll keep on going, because we love it.