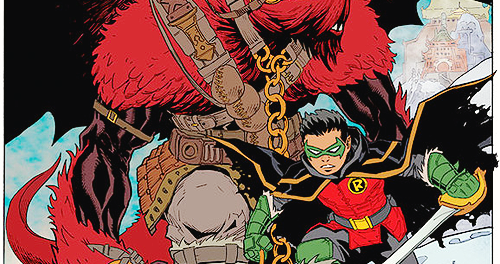 I’ll say this much about DC’s post-Divergence initiative, it truly has been very diverse compared to the pre-Convergence lineup. The offerings so far have been very unexpected from a new Batman, the Hitman continuation, All-Star Section Eight, and even Prez. But I have to say that the one with my highest hopes attached to it were one Robin: Son of Batman. Damian Wayne is one of my favorite DC characters (crazy I know), and his first turn as a solo act is a success. Most of Damian’s time as a character has been spent bouncing against other characters: Dick Grayson, Bruce Wayne, and Alfred. But Pat Gleason’s first turn as the sole guiding voice on Damian, has found that there is a comfortable place where Damian can be the leading man even without another dominating voice.

While it might be difficult to see why there might be some trepidation over the new Robin book, it’s hard not to get past the old dynamic of Dick/Bruce pairing with a young Robin, and that was a dynamic that fit like a glove over the last 6 years the series existed. So that boldness to change it is rewarded here, as we see what Damian can do on his own with no adult supervision. Batman and Robin was one of the best looking books DC had to offer, and the new series is no different. The first issue is a visual feast: from Damian kicking butt, to an even bigger Man-Bat, and terrifying dreams. It helps that DC’s willingness to experiment with tone continues here, the first issue throws out the typical rulebook for a Batman family book and go on a global adventure, which given Damian’s nature and temperament suits the proceedings just fine. While the book does have some baggage to unravel from previous storylines, it doesn’t get in the way of anyone fresh-faced to the characters, and if anything helps to enhance and give context to Damian’s struggle against his past.

While DC has seen a recent rise to the $3.99 price point on many of its books, that should not be a reason for you to be impeded. This first issue has everything a superhero comic ought to have: fantastic storytelling on plot, character, and the art itself. The latter is extremely eye-popping as the cover can attest to. Overall, more bang for your buck than a lot of books can offer these days. For anyone looking to jump into the new DCU, or see why Damian Wayne is a great character this can be a win for you, or if you want to see a creator at the top of his craft this is a great place to start.