I am deeply saddened at the passing of Actor Sir Christopher Lee at the age of 93. He was one of the most badass men to ever grace the stage or silver screen, both on that stage or screen, and off. He was a True renaissance man in every essence of the word. He had an affinity for Heavy Metal Music, not just listening, but playing and recording it and had put out a new metal album as recently as last year. He appeared in some 281 film and television productions over a career that started in 1946 and appeared in in such notable films as Laurence Olivier’s 1948 Hamlet, played Sherlock Holmes, Dracula, starred in 1973’s seminal horror classic The Wicker Man,  and played villian Francisco Scaramanga in 1974’s James Bond film The Man with the Golden Gun.

Lee as Francisco Scaramanga in The Man with the Golden Gun

Lee as Dracula in Dracula Prince of Darkness

He would collaborate with Director Tim Burton a total of five times, including appearing in Dark Shadows (2012), as the Jabberwocky in Burton’s adaptation of  Alice in Wonderland (2010),  in Sweeney Todd (2007), as the Narrator and as Willie Wonka’s Father, Dr Wonka in Charlie and the Chocolate Factory (2005), and Burgomaster in the film Sleepy Hollow (1999). He had also staked his claim to  being a Prince of Geekdom with Saruman in the Lord of the Rings trilogy and, of course most important to me, was Count Dooku/Darth Tyranus (Part of the source of my 501st Garrison Tyranus​’ name) in Star Wars Episode II: Attack of the Clones and Star Wars Episode III: Revenge of the Sith. He was described as being humble and generous, and as a man that truly enjoyed being alive. 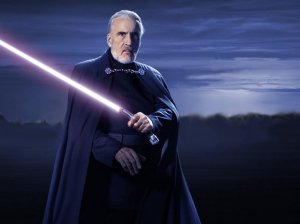 Lee as Sarumon, behind the scenes with Director Peter Jackson filming The Lord of the Rings films.

Sir Christopher Frank Carandini Lee, was born on 27 May, 1922 in London, England the son of Lt Col Geoffrey Trollope Lee and his wife, Contessa Estelle Marie. He was a WWII veteran, first volunteering and fighting with Finnish forces during the Winter War in 1939. He then volunteered with the RAF but, according to  SIr Christopher in a 2003 interview, he suffered from headaches and blurred vision during his final training flights. “The medical officer hesitantly diagnosed a failure of his optic nerve and he was told he would never be allowed to fly again” (From Louis Paul’s 2007 book Tales from the Cult Film Trenches: Interviews with 36 Actors from Horror, Science Fiction and Exploitation Cinema). He was frustrated but undeterred and went on to serve with distinction in the RAF Intelligence service in Africa, later saw combat with the legendary Gurkhas of the 8th Indian Infantry during the Battle of Monte Cassino. To finish out his military service Sir Christopher, now promoted to Flight Lieutenant and able to speak fluent French, Italian, Spanish, and German and moderately proficient in Swedish, Russian and Greek, was assigned to the Central Registry of War Criminals and Security Suspects where he was tasked with helping to track down Nazi war criminals. Sir Christopher would later say: “We were given dossiers of what they’d done and told to find them, interrogate them as much as we could and hand them over to the appropriate authority … We saw these concentration camps. Some had been cleaned up. Some had not.” (“Christopher Lee: a giant among actors”. The Times. 20 November 2009.) In that same interview Sir Christopher mentioned that during the war he was attached to the Special Operations Executive and the Long Range Desert Patrol, the precursor of the SAS, but always declined to go into details. “I was attached to the SAS from time to time but we are forbidden – former, present, or future – to discuss any specific operations. Let’s just say I was in Special Forces and leave it at that. People can read in to that what they like. Lee retired from the RAF in 1946. Lee retired from the RAF in 1946.

Christopher Lee as Lord Summerisle in The Wicker Man

Always known for his deep, strong, voice, Lee was also known for his voice-over work and singing ability, recording opera and musical pieces starting in 1986 and started working with symphonic metal bands in 2005, culminating in the album Charlemagne: By the Sword and the Cross in 2010. The followed that with the heavy metal album Charlemagne: The Omens of Death in 2013.] He was presented the “Spirit of Metal” award at the 2010 Metal Hammer Golden God awards ceremony.

His voice-over work would include animation, like reprising his role as Count Dooku in the 2008 animated film Star Wars: The Clone Wars, video games including the Kingdom Hearts series, The Lego Lord Of the Rings and Lego Hobbit, and Some thirty years after playing the role, Sir Christopher provided the voice of Scaramanga from The Man with the Golden Gun in the video game GoldenEye: Rogue Agent, and there are so many more. He was the narrator in Tim Burton’s The Nightmare Before Christmas and Pastor Galswells in The Corpse Bride. 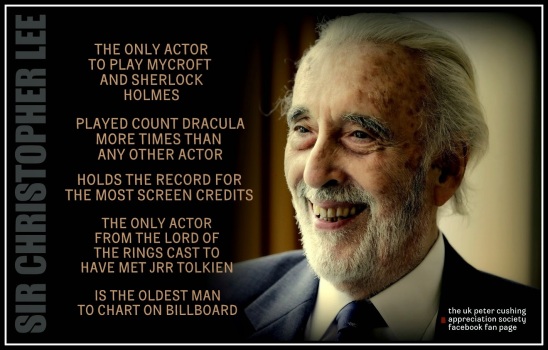 Sir Christopher was Knighted by Prince Charles for services to drama and charity in 2009.

We may never see his like again.  Rest In Peace, Sir Christopher. Thank you. You did it all.

Jonathan "Evilboy" Wolk is a married father of one and owner of Used Future Workshop. He makes replica props and displays for costumers and collectors and is a proud member of the 501st Legion. He has been a contributor to Pop Culture Uncovered since 2013.

1 Comment on On the Passing of Sir Christopher Lee: An Appreciation