According to the Guardian, MGM is in talks with actor Denzel Washington, and director Antione Fuqua to star and direct the Magnificent Seven. The idea of the Magnificent Seven is based off of the 1954 film Seven Samurai, directed by legendary director Akira Kurasawa. MGM has wanted to remake this film for some time now. Originally, a script written by True Detective writer and producer Nic Pizzolatto​, was in the pipeline with Tom Cruise slated to star. After that fell through, MGM went back to the drawing board and found a winning combination  of actor and director to revive interest in the classic film. 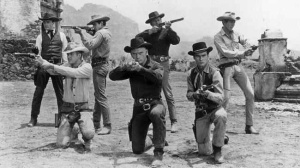 Yul Brenner, Charles Bronson, and Steve Mcqueen made this film a household name, so there are big shoes to fill. Tom Cruise was the original star, but he does not have the box office draw he once did. After the success of the Equalizer, replacing Cruise with Washington is a very good choice talent and financial choice, and this is off to a great start. Negotiations are early at the moment, but when Washington and Fuqua get together, the result is cinematic magic!

Writer, Critic, and passionate about comics, movies and equality on the big screen.
Follow Pop Culture Uncovered on WordPress.com