I would like to tell you that I am going to make this review, of The Walking Dead Season 5 Season premiere episode, “No Sanctuary”, a “spoiler free” review, but that’s not going to happen. There’s just way too much juicy goodness that happened in this episode for me not to talk about it (CLANG, Slice, Gush!!!! NEXT!) and besides, if you’re not watching it live, Sunday Nights at 9PM East Coast Time on AMC, what the hell is wrong with you!?! So YOU HAVE BEEN WARNED…

Last season many people talked about it being a season of “Hurry up and wait”, where much of everything in the last two thirds of the season was all building up to something, for the arrival in Terminus. There were those who called the season slow, plodding, and, well, downright boring at times. I was not one of those people, but I can understand that point of view. There was not a lot of action. There was this building tension that hung over everyone, with all of us wondering, ”Well what the hell is going to happen next?” Between looking at the flowers, Beth being kidnapped, and Dr. Porter’s miracle cure tour to D.C., we were left with all these questions and no answers. All of it was leading up to Terminus. Well we got to Terminus, and our weary travelers realized pretty quickly, if not quite quickly enough, that something was not quite right. Ultimately the “Termites” (all credit to The Talking Dead’s Chris Hardwick @nerdist for coining that one) threw everyone into a box car and left us waiting…

And that brings us to Sunday night. Wow. Wow, wow, wowwee, wow, wow, wow! You wanted action? Let’s have Badass Carol™ sniping dudes left and right and blowing up a giant propane tank FTW. Let’s have Tasha Yar/Terminus Mary getting kneecapped and then left to be eaten alive by walkers by Badass Carol™again. Let’s have murder, and mayhem (literally. Look it up in the dictionary), guys getting lined up at a trough to be slaughtered like pigs, gunfights, knife fights, attempted infanticide, bludgeoning, stabbing, face eating, MacGyvering of makeshift weapons, I mean, what didn’t happen last night? 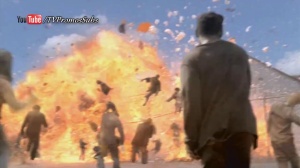 That is a good question isn’t it? What didn’t happen? It seems Tyreese finally got off the Schneid and managed to get his kill on. Maybe. (I never saw a body, did you? I really hope that Tyreese really did like he said and finished the job. He sure didn’t want Carol going in there to make sure the job was finished…Hmmm?) (Note to self: Either way, do not threaten Judith in front of Tyreese.) I also did not see anyone asking about Lizzie and Mika, or any mention of where Michonne’s sword is (SERIOUSLY!?! Where is that thing!?!). There were no answers about Beth, or any clarity about what the hell Eugene is talking about. Is that guy for real, or is Abraham being taken for a ride? There are still a lot of questions to be answered this season, though I do not think it will all be quite as exciting as this season starter. Now they will have to really figure out what they all want and where they plan to go with Terminus likely in the rear view.

And how about Martin, that Termite in the shed with Tyreese ? The mind games he plays with Tyreese are just brutal!

Martin-“Horrible shit just stacks up day after day. You get used to it.”
Tyreese-“I haven’t gotten used to it.”
Martin-“Of course you haven’t. You’re the kind of guy who saves babies. That’s kinda like saving an anchor when you’re stuck on a boat in the middle of an ocean.” Oh yeah, and this gem:“You’re a good guy. That’s why you’re gonna die today.” I mean REALLY!?! That guy sure has bought in to the program! That seemed to be a theme with all the residents of Terminus. The way Mary explains things to Badass Carol™, combined with the flashbacks, it’s clear how low these people have fallen and what has gotten them to the place where people were no more than meat. She talks about how it became what it has become; “The signs, they were real. It was a sanctuary. People came and took this place. And they raped and they killed and they left over weeks, but we got out, and we fought, and we got it back. We got the message: You’re the butcher, or you’re the cattle.”

That sentiment, “you are either the butcher or you are the cattle”, is one that I think may end up echoing, resonating, through much of the season as we see our merry band of survivors continue attempting to make their way in this world, possibly to Washington D.C. There will no doubt be hard and painful decisions to be made. But who will lead them? Will it be Badass Carol™ or will Rick, with his new “No Prisoners” approach, finally be the decisive leader these people have long needed? Even in those happy moments at the end of the episode where we have the tearful reunion with everyone, Carol and Daryl’s embrace, Tyreese and Sasha, and of course, Rick seeing his daughter Judith again. He had thought her dead and that had changed him, with him talking about going back in to Terminus to make sure they finished off every last Termite, despite the immense risk to all of them, but once he held her in his arms again he stopped talking about revenge on the Termites, so will he remain strong otherwise? 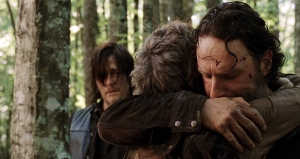 And what about Morgan? Didn’t think he’d be back, did you? (unless you’ve read the books…) There is SO much promise for the coming season, and I for one can not wait to see where they take us… Show writer Scott Gimple and Episode Director/ Show FX supervisor Greg Nicotero had some interesting if vague tidbits on the must-watch aftershow The Talking Dead, and I for one am ready to go along for the bloody ride….

Join Rick and the gang, Sunday Nights at 9PM Eastern time on AMC

Jonathan "Evilboy" Wolk is a married father of one and owner of Used Future Workshop. He makes replica props and displays for costumers and collectors and is a proud member of the 501st Legion. He has been a contributor to Pop Culture Uncovered since 2013.
Follow Pop Culture Uncovered on WordPress.com