Not to be outdone by our little romp over to Big Planet Comics this week, the Review Crew graces us with their picks this week!   Take a look at what they have and remember:

**AS ALWAYS BE MINDFUL THAT THERE WILL BE SLIGHT SPOILERS, READ AT YOUR OWN PERIL!!** 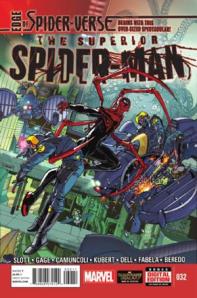 Recently, I asked a few of my friends who write for The Next Issue Outpost, what recent villain was created that was worth his/her merit. They answered, but I couldn’t find anyone villainous enough, until now. This spider slayer introduced in this issue killed multiple spider-men across the multiverse and I have yet to find out his name. His first appearance in Superior Spider-Man #32 is surrounded by questions.

There have been different universes, where others have carried the mantle of Spider-Man. The most notable is Peter Parker from the 616 universe. The first I remember of a different Spider-Man (and yet the same) was from What if…? #1 (1977). That iteration of the wall crawler was displayed inside this newest book along with others from House of M, Civil War, and one that looks reminiscent of Web of Spider-Man #100. Each scene is a corpse for Otto to find. Someone is killing the various “spiders” and any that are in the way.

In the eighties, the biggest story line was the 12 issue maxi-series, Marvel Super Heroes Secret Wars. This helped introduce one of the biggest changes in Peter Parker’s life. In the modern age, Dan Slott has come a long way from writing Ren and Stimpy, and after his amazing tale of Otto taking over the Spider mantle in 31 previous, consecutive issues, I am salivating on what’s going to happen in his Spider-verse. Will Otto Spidey help Peter Spidey? Will the symbiotic Spidey Suit swing through New York again? Will Flash Thompson and the Guardians arrive? How long will we have to wait until Morlun returns? And will this new Spidey killer be working for him or something far more sinister?

As per usual, Brian Bendis’ Ultimate Universe work on Spider-Man has been the standout attraction of the franchise. The continued adventures of Miles Morales don’t seem to be broken and the latest title to carry the USM moniker doesn’t try to fix it. Of course, the first story has thrown readers for a loop BIG TIME with the return of some key players.

This issue picks up with Miles inheriting possibly the worst generational curse an Ultimate Marvel hero could possibly receive: Norman Osborn. The Green Goblin’s STILL alive with a real mad-on for the first spider costume he sees. The resulting throwdown ends up being a real treat. Anyone who keeps up with this book knows that the key sucker punch in the narrative is the return of Peter Parker (we think?). On one hand, his reappearance (if this is him…because it could very well not be) sort of cheapens his EPICOHMYGODHOLYSHIT moment of ultimate sacrifice. After all, Peter’s death is literally part of the reason for Miles’ spider career to exist on a couple of levels…and we like Miles. On the other hand, when Bendis is writing him, it’s always nice to see Peter back. The great thing here is that even though it’s clearly an attention-getter to see him, Parker never comes across as a distraction from the reason we came to this book. His big cameo never quite steals the spotlight from Miles. All in all, this is a plot twist that could have gone tragically wrong and Bendis handles it very well. Visually, David Marquez is one of these artists who just really “gets” the aesthetic for Bendis’ universe and the need for it to be unlike anything you’re seeing in the 616 continuity. Also, his Green Goblin looks absolutely terrifying. Truly. Norman has never looked scarier. Every scene in the action beats leaves your mouth open, thinking “Oh, my God, someone is going to fucking DIE.”

Bottom Line: As long as Bendis can justify Peter’s return (and thus far, he hasn’t really let us down with this franchise), this is a mostly strong, beautiful book.
4 out of 5 stars

The snow falls and the spread have covered the landscape with their dangerous thing like bodies. Justin Jordan delivers us a world if John Carpenter’s “The Thing” or a David Cronenberg film would have spread over the land. These are grotesque creatures that spread and combine with multiple organisms. After finding the baby Hope, No finds himself in a situation that any survivor of an apocalypse would have to go through with finding food. Elsewhere the leader of the bandits that attacked No and Hope from the previous issue, who is very stylish wants to find them. The bandit leader is like a pop star shaven chest, long flowing hair, and somehow not feeling the cold air. Hope lets No shes needs food and luckily No runs across traders with a woman named Molly, who is clearly out of it. Everything turns bad when the crazed old man from last issue returns with some spread. I really liked this issue with Hope giving most of the dialogue on what No is going to do and what happens in the story. The action is really paced well, along with the art and colors that really compliment each other. Justin Jordan really created a strong silent warrior like No, who reminds me of a samurai with axes thats trying to protect baby Hope.

I didn’t really find any issue with this issue but some parts like the spread growing absurdly fast after the old man either uncovers the snow to show some spread emerge but since we don’t know much about the spread. Also there is a spread worm that shows up but gets dispatched really easily with the help of Hope.